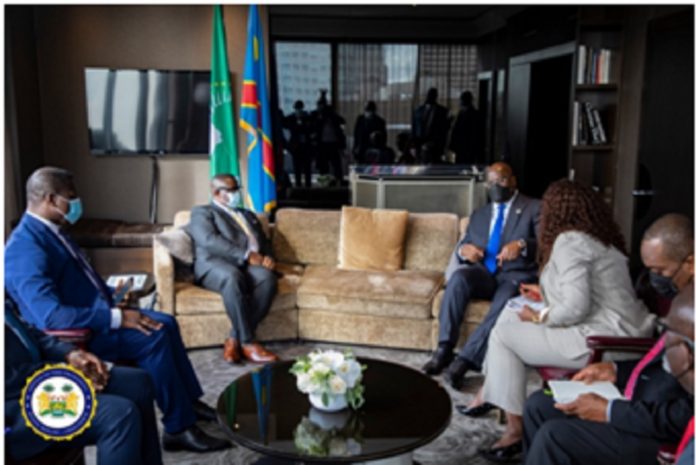 President Bio commended President Pahor for the leadership of the European Council and explained that the strategic priority of his government was human capital development.

In his remarks the Slovenian President commended President Bio for his leadership and expressed interest in exploring business opportunities between the two countries.

In another engagement, President Bio held a bilateral meeting with President Tshilombo of the DRC, who also doubles as Chairperson of the African Union.

As Coordinator of the Committee of 10 Heads of State and Government of the African Union (C-10), President Bio also called for more solidarity and the reinforcement of the African common position on the reform of the United Nations Security Council.

The Chairperson of the African Union praised President Bio for his leadership of the C-10 and expressed his continued support for the African Common Position. The two Heads of State and Government also committed to strengthening bilateral relations bewteen Sierra Leone and the DRC.

In a separate engagement, His Excellency President Julius Maada Bio held talks with the Director-General of the WTO, DrOkonjo-Iweala. During the meeting, she updated the President on some of the plans of WTO, including advocating for African countries to develop COVID-19 vaccine manufacturing capacities, food security, developing a fisheries fund and concluding on the agreement of the fisheries subsidy, digital trade for African countries and building the capacities of small and medium enterprises for women.

On his part, President Bio informed her that COVID-19 had posed serious challenges to the Sierra Leone’s economy, adding that: “our country’s response to the pandemic has been robust because of our experience in the fight against Ebola”.

He congratulated the Director-General on her new role and expressed his desire for a sustained partnership between Sierra Leone and WTO.