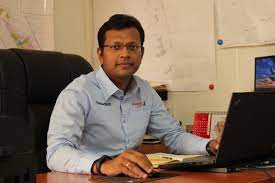 Following very harsh challenges posed by the general global crisis including the recent Russia-Ukraine war, Sierra Leone’s Mining industry has been badly affected.
This has resulted to one of the country’s leading mining companies, Sierra Mineral Holdings 1 Limited (VIMETCO), to suspend operations in the country for an initial period of one month pending review on global developments.
This sad revelation was made by the Company’s General Manager, Basudeb Datta. He said overall in the world they have seen such an increase in the energy price and European countries are mostly affected very badly.
The situation, he went on, started late in 2021 and has not improved so far. He said energy is one of the most important parameters that is being looked at in the production of alumina and further down the line metal aluminum
“We, being at the bottom of the production chain in a vertical integrated production line, Bauxite to alumina and alumina to aluminum, energy is the number one criteria. So when energy cost is ramping up so badly, unfortunately we cannot manage our cost of production and remain competitive in the market” the general manager said.
He went on saying; “with this energy price increment which is becoming exorbitant now, our parental link has decided to reduce for a limited period of time the production of alumina and eventually aluminum. This is a crisis but every crisis comes with an opportunity and this we will use and see how best we can prepare ourselves for the big opportunity ahead.”
He said right now the company’s management is relentlessly working for external party sales and it believes in no time the situation will be overcome and it will take a U-turn and start producing and selling Bauxite in a bigger volumes.
He said: “Right now we have one of the biggest bottlenecks as we cannot do cape-size but supramite, which are smaller vessels. If you want to be competitive in the bigger market you have to sell Bauxite in a bigger volume with doing bigger sized vessels. We are working right now in finding better logistic foundation, putting the necessary conditions so that we can immediately start external sales in a bigger volume”.
Chief Finance Officer for VIMETCO, Abdul Bangura said this year the company has had extraordinary challenges which started by the end of 2021.
The energy crisis in Europe he revealed, affected the company’s vertically integrated holdings in Rumania badly and they informed them that they need to curtail significantly the uplift of Bauxite and this made the company faced with some sales challenges.
He said now with the Ukraine-Russia crisis, it has further deepening the pressure upon the company and now they are having challenges for them to sell to their parent holding because of the war.
“What normally happens is that our vessels will need to pass through the Black Sea, taking the rout, Ukraine and Rumania but as a result of the ongoing war, vessels are refusing to sail through that route for obvious reasons” Abdul stated.
He went saying: “We are in the position now where we are finding it difficult to sell because mainly we are selling predominantly to our parent holding. So at the moment, we are challenged financially and we are aggressively looking out for buyers. We believe it is a problem that is we will be able to surmount in the coming months”.
However, he said contrary to what people are speculating, these challenges, despite how serious they are, will not lead to the closure of the company in anyway.
He said what the company is doing at the moment is undertaking some series of strategic actions so as to be able to fine new buyers and then continue operations.
“Now we are doing a temporal closure for about a month, reason being that we have accumulated extensive and huge level of stock of Bauxite which we are unable to sell. So we cannot continue to produce and pile stocks and just building cost to pay suppliers. We are stopping productions for now because we have significant levels of stocks, while we continue to engage more buyers around the world. Once we are able to get new buyers then we can again commence production”.
Notwithstanding all these challenges the company is facing, it was able to successfully pay the sum of Two Billion, Three Hundred Million Leones as surface rent to landowners and the community past weekend, as compensation for the lands utilised by the company to undertake their mining activities.
General Manager Datta thanked land owners for their patience and support to the company. He encouraged them to use the money received judiciously, especially towards investing in the education of their children so that they would be able to secure lucrative jobs.