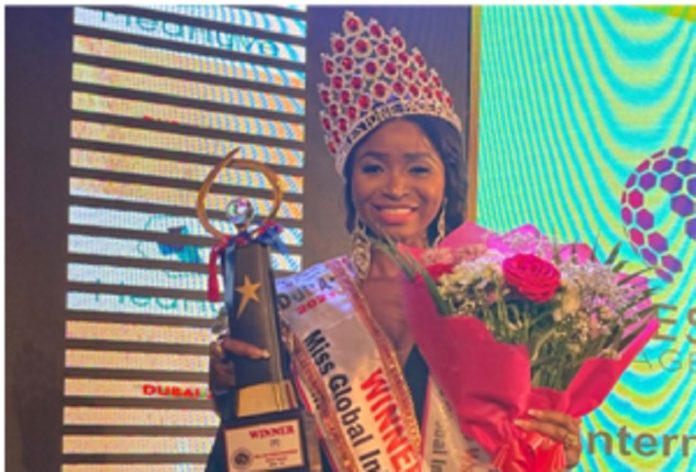 Naomi was the only African model representing Sierra Leone in the pageant.

The pageant is one of the most respectable international titles for married and unmarried Women.

The company, Milestone Pageant holds 3 annual pageants in a year; for Indians, for other Asian Countries and another for World, which is the Miss and Mrs Global International, hosted in different countries every year.

This year’s event, because of the COVID-19 19, the organizers decided to do one event for all the different 3 annual Pageants.

The International Pageant Systems by Milestone Pageant has been developed to promote today’s women, their accomplishments and commitments.

In 2008, she won the Miss Convent Beauty pageant. She was the 2nd runner-up in the Miss Inter – Secondary School beauty pageant, in 2009.

In 2016, Naomi Kay was crowned the Face of Africa, at the International Beauty Pageant in Istanbul Turkey. She also received the award of Best Designer/Dresser at the African Entertainment Awards in Turkey.

Naomi has participated at the Uzbekistan Traditional outfits display in Turkey. She was also a participant at the Vivid Emporium Africana display in Freetown and several other laurels.

In 2018, she represented Sierra Leone at the Miss Rainbow of the World Beauty Pageant in Poland and won the Miss RED of the Rainbow award.

“This Pageant System is not only based on or to just show the beauty of the women but it is also a kind of campaign which makes themselves dependent and aware of their rights, encourage them to pick up a social cause and this is the reason why Milestone winners are becoming the role model for other women,” comments from the organiser.