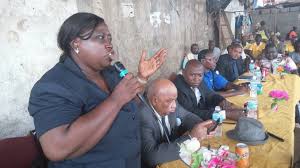 The Legal Aid Board has commenced mediation on the impasse between factions in the Masjid Thauba Mosque in Kissy in the east-end of Freetown. The mediation took place in the head office of the Board in Freetown. One of the factions is led by the Chief Imam Sheik Alhaji Tejan and the other by his Deputy Sheik Ibrahim Conteh.

The two factions have been locked in a longstanding stalemate over leadership of the mosque and monetary matters. This had resulted in insults on many occasions after prayer sessions to the dismay of worshipers. Prior to the impasse, the two have been serving as Chief Imam and Deputy respectively.

The Executive Director of the Board, Ms. Fatmata Claire Carlton-Hanciles said as a key partner to the United Council of Imams, the Board has decided to intervene to assist in finding a lasting solution to the conflict.

She expressed disappointment at the fact that worldly things such as money, backbiting, jealousy and ego have taken over the places of worship. Moreover, this state of affairs has attracted a lot of attention which is negatively impacting the image of the mosque and its leadership.

Ms. Carlton-Hanciles admonished both parties to remain calm and know that a winner-takes-all attitude will not be tolerated. She reminded them that as Men of God they should always provide moral leadership noting that they should not by their behavior desecrate the mosque.

She said she cannot assure those who decide to take the law into their hands that they will receive legal assistance in a timely manner. This is because the Board’s hands are full with thousands of indigents on the waiting list.

The session ended with the agreement by both parties to meet again.