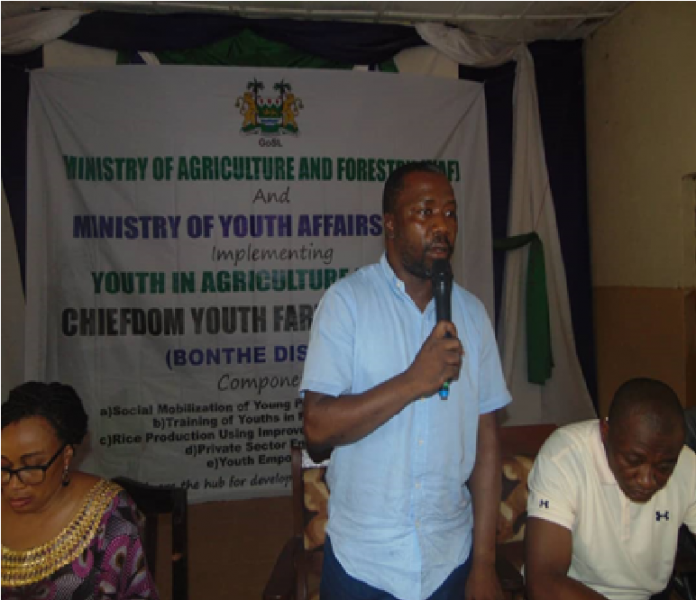 The Ministry of Youth Affairs has concluded its nation-wide tour on Social Mobilization, Identification and Mobilization of Youth Groups to implement the chiefdom Youth Farm Experiment Project.

The tour started on 18th March with both the minister and deputy leading the team to conquer the entire country. In a bid to achieve this goal, the Minister of Youth Affairs, Mohamed Orman Bangura led the Northwest team and the Deputy Minister Lusine Kallon took the southeast.

It could be recall that the government of President Julius Maada Bio, through the Ministry of Youth Affairs, earlier in March 2021 embarked on the creation of more than ten thousand job opportunities for young people across the country.

According to the minister, the Chiefdom Youth Farm Experimentation Project will be implemented through the Youth in Agriculture Project under the Ministry of Youth Affairs.

The Chiefdom Youth Farm Experiment Project is one of President Julius Maada Bio’s initiatives to enhance food availability and food self-sufficiency, drastically cut down the importation of rice, minimises youth unemployment and overall, alleviates poverty in the country.

Minister Bangura noted that to augment the distribution of youth employment opportunities across the country, the chiefdoms visited will employ 35 males and 15 females.

He informed that a total of 50 youth per chiefdom will directly benefit from the project; adding that the Ministry of Youth Affairs is collaborating with the Ministry of Agriculture, Forestry and Food Security to implement the Chiefdom Youth Farm Experiment Project.

The Ministry of Agriculture will provide the needed technical supports while the Ministry of Youth Affairs implements and supervises the project.

Minister Bangura analysed the new policy-shift that the government has put in place to expedite the deployment of agricultural machinery, supply of seeds, fertilizers and how to provide other technical supports to youths in all the districts.

He noted that the government of President Julius Maada Bio is determined not to get it wrong; adding further that successive governments had tried to implement similar projects but failed.

“It is because the projects were politicised; making the deployment of machines, supplying of seeds and fertilisers and the provision of other technical supports delayed due to rigorous procurement procedures. To get it right this time, our government has decided to partner with private investors for the distribution of seeds and fertilisers, deployment and management of farming equipment and the provision of other technical supports,” the minister explained.

He also engaged and urged able-bodied-men and women, Paramount Chiefs and other stakeholders across the country to embrace the project.

Deputy Minister Lusine Kallon was also doing similar engagements in the southeast where he met with stakeholders from the southeast.

He informed that that youth participation in the agriculture sector is becoming a prominent issue as they have disenchanted with agriculture worldwide.

Remarkably, all the targeted stakeholders pledged to undertake the project.