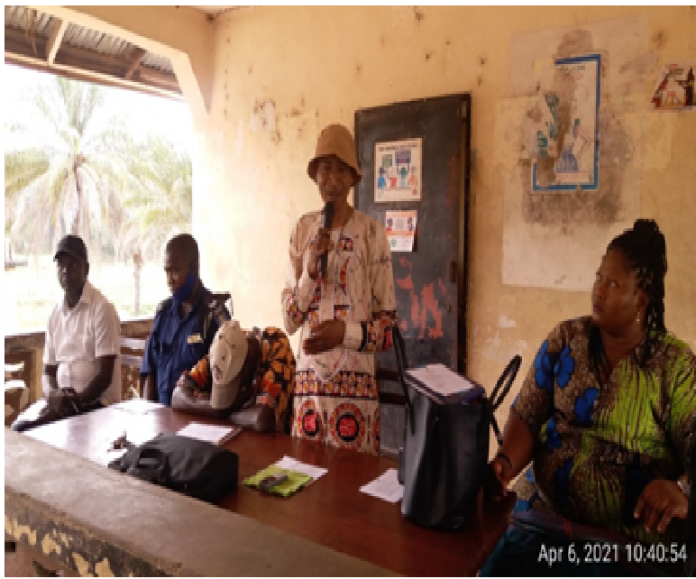 Major local stakeholders and other members of the Yele community in Gbokolenkenchiefdom, Tonkolilidistrict, have pledged their unreserved commitment to the fight against corruption in a sensitization meetingconducted by the Anti-Corruption Commission (ACC) office in the North-East region.

Chiefdom Speaker, David K.Fullah, who deputized the Regent Chief Alhaji Mustapha Sesay, said: ‘corruption is a threat and we commend the ACC in fighting it. We will help fight against it too in our community. I therefore encourage my people, particularly the youth, to report corruption to the ACC at the slightest opportunity.’

The Chief explained that his people are keen on receiving and promoting development drives with the intention to make life better for them and their children. In the process, he vowed, corruption will be bravely confronted to ensure development goals are achieved.

In her statement, theACC North-EastManager, MariamaNavo,underscored that corruption impedes improved standard of living in a country, and particularly makes life worse off for inhabitants of rural communities. As such, local community leaders and members should consider the fight against corruption as a national obligation.

She opined that the paradox of the country being naturally rich yet considered as one of the poorest in the world is largely on account of corruption. She added that the state of affairs regarding illicit behaviour in public offices would change for the better, if citizens are adequately educated on the dynamics of corruption, and resolved to fight together.

Misappropriation of Public Funds and Property, as well as bribery, are as common in urban communities as they are in rural ones, MissNavo said, noting however that the scene of the offence does not ameliorate the attendant penalty whatsoever. This is why, she continued: ‘The ACC has come to educate you to resist and report corruption. And listen to your views to stifle this cancer.’

MissNavo encouraged the local authorities to take the burden to lead in the fight against dubious activities in public offices in the locality. This should start with understanding that power and authority should be used to ‘develop the country’ for the good of all. Therefore, ‘speak against corruption – put your country first above all else.’

The anti-graft team further informed the people of Yele that even though the Commission would keep toughening the law, through Parliament, against the corrupt, it places priority on preventing corruption through sharing information and reviewing systems and processes of public institutions.

The Local Court Chairman, John B. Tholley, also made a response to the anti-corruption message when he boldly condemned corruption, and thanked the ACC for the interactive engagement. He alleged that his community has not benefited from mining surface rents collected by authorities in the chiefdom. This he described as ‘deprivation’ and called on the Commission to investigate the report and penalize potential culprits.

Mr.Tholleyadded that, he had been empowered through the engagement to not only reject corruption but also ‘to report corruption to the ACC using the toll-free line 515 or Africell;or call 077985985/077986986.’

Salient contributions condemning corruption were also made by the SLTU Chiefdom Chairman, the Sierra Leone Police, and the Youth Chairman, among other members of the community.