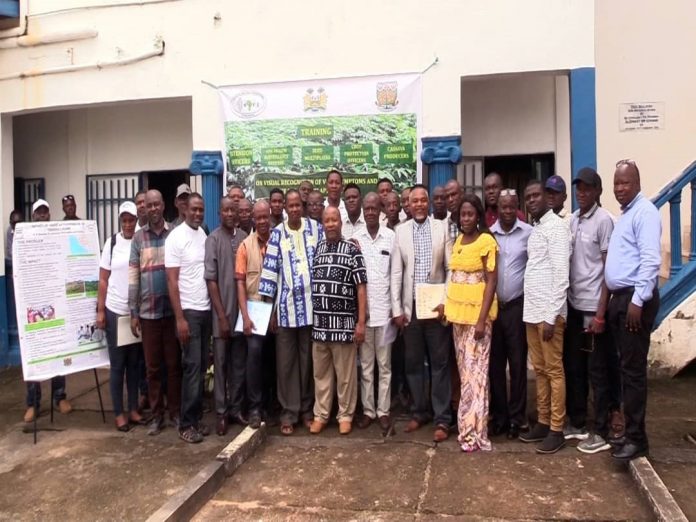 West African Virus Epidemiology; an organisation that helps in ensuring food security through finding out diseases that affects cassava has collaborated with One Health Sierra Leone and NJALA University to train DSO’S, Extension officers, Crop Protection officers, One Health surveillance officers and cassava producers on recognition of virus and the Nuru Application.

This according to the organizers is to enhance food security in Sierra Leone, especially saving the cassava crops which are suspected to be infected with Cassava Mosaic Disease (CDM).

A survey conducted by WAVE SL reveals that 88% of cassava are suspected to be infected with the disease.

The country Director WAVE -SL Dr. Alusaine Edward Samura, said they are conducting training on the use of artificial intelligence in disease diagnosis surveillance.

He said the brown streak virus and the Cassava Mosaic virus are two major viruses affecting cassava produce. He also added that they are starting with the top cadence (surveillance officers, phytosanitary officers etc) who will cascade the information to the farmers.

He also said that WAVE -SL at its inception developed a response plan for cassava. He also said they have trained molecular virologists who went to study in Côte d’Ivoire, adding that they are planning to establish the first disease diagnostic laboratory dedicated to plant health as part of their capacity building drive.

The National one Health Technical Coordinator, Joseph Bunting-Garden said Cassava is an important staple food in Sierra Leone which is second only to rice.

He also encouraged WAVE-SL to get the locals and farmers involved in the fight against these diseases.

The Deputy Vice Chancellor, Njala University, Prof. Alie Bah, said they are very happy as a university because it is one of the very important projects they are implementing as a university.

He pledged the university’s support to the project.

The Crop Protection officer at the Minister of Agriculture, Raymonda Johnson, said the extension officers are trained so that they Will go and train the farmers.

She also added that they are training the phytosanitary officers who are the border post so they can offer effective inspection to the crops that will help in importation of quality cassava produce.

She reaffirmed that the training will help in increasing food security in the country.

Sallieu Jalloh who is one of the trainees and also the Disease Surveillance officer at Bombali district said he is happy to learn about crops infection and disease. He also said for the past ten 10 years, the disease that have affect Sierra Leone are plant and animal related. He said this is the first time he is learning how to diagnose disease from plants while pledging commitment to pass the knowledge gained to his colleagues.

The head of phytosanitary at Lungi Airport, David Fonah said “the Nuru Application which is there to help them detect virus is very important “as it will help our consignment not to be thrown away when they get to the United Kingdom or Europe.” He said this will help boast our economy as a nation.