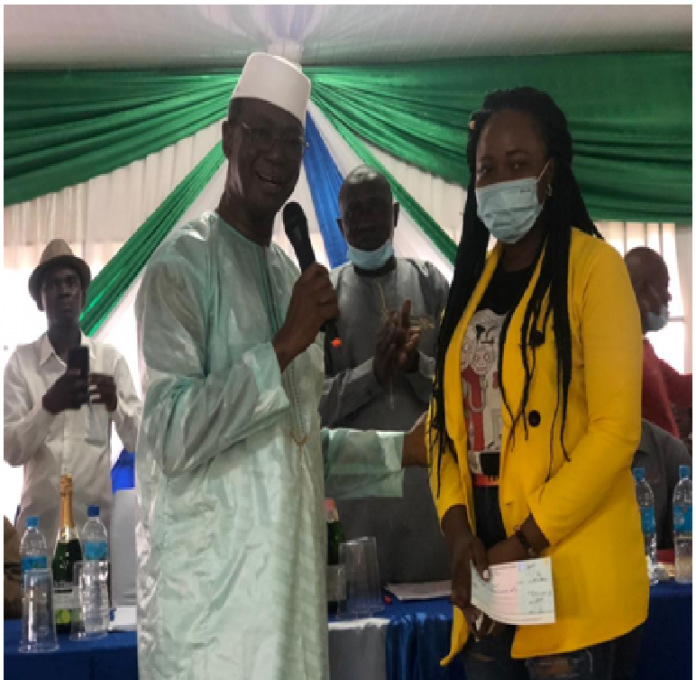 Dr. Wurie handing over cheque to a student

Sierra Mineral Holdings 1 Limited – VIMETCO through the Community Development Committee (CDC) over the weekend doles out scholarships to Five Hundred University and College students within its mining operational.

The students drawn from 5 mining communities including Lower Banta, Upper Banta, KpandaKemoh, Dasse and Bumpeh Gao chiefdoms in Moyamba, Bonthe and Bo received One Billion, Eight Hundred and Seventy-One Million Leones worth of scholarship to pursue their studies in the various campuses with funds Sierra Mineral Holdings 1 Limited through the CDC.

Addressing the beneficiaries, Minister of Tertiary and Higher Education, Professor Dr. Alpha T. Wurie appealed for the students to make good use of the opportunity given them by VIMETCO, noting that many other qualified students are out there in search of such opportunities but cannot get them.

“My ministry’s mandate is to provide quality, accessible and relevant education to its citizenry and with such support from VIMETCO and the CDC, work is becoming easier for me and my team,” the Minister stated.

He commended VIMETCO and the CDC for such intervention, while calling on other mining companies in other parts of the country to replicate the idea of VIMETCO in their communities of operations.

Abdul Bangura, Chief Finance Officer of Sierra Mineral Holdings 1 Limited said to qualify for the scholarship, beneficiaries must be students hailed from the Company’s operations communities and must have acceptance from college/university to pursue a course.

In addition, he went on, to sustain the scholarship, already beneficiaries must continue performing high in his/her academic work.

He added that this is something SMHL intends to continue to do and therefore called on the communities to support the company.

According to Mr. Bangura, it is possible that the will be an addition to the number of students awarded the scholarship and that the number might rise to Five Hundred and Thirty-Three students.

And if so, he went on, the amount of money from VIMETCO through CDC for this year’s scholarship will be Two Billion and Three Million Leones in total.