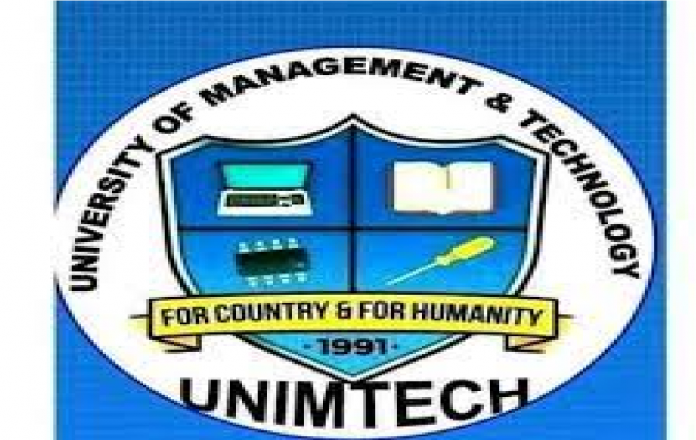 A year after its acquired university status, University of Management and Technology (UNIMTECH), on Thursday 10th June 2021, at the college’s campus, at Kissy Dock Yard in Freetown, conferred degree and diploma certificates to 2,796 students.

Vice Chancellor and Principal, University of Management and Technology (UNIMTECH), Professor RoselineEmehUyanga, noted that these sets of graduates were the first set after the college acquired university status.

She said since the University was established in 1991, it has contributed immensely to the development of the nation, for according to her, UNIMTEC has produced men and women of substance in the country who hold strategic positions in many sectors. “This is indicative of the University’s pursuit of excellence and as a means of making positive impact in the world,” she said.

She added that the University has branches in Bo, Kono, Kambia and its headquarters in Freetown and offers marketable courses. “We have taken the University to the doorstep of four districts. No need to travel to town to attend university,” she said.

She spoke of staff capacity in the University, noting that they have many lecturers with PhD as well as masters. She disclosed that some of their lecturers have also expressed interest to further their education. She called on the Ministry of Tertiary and Higher Education to provide grant-in-aid to these lecturers.

She called on graduands to be curious amidst challenges and be passionate too. She further urged them to stay open and accept community service, for according to her that is the essence of education. “You are all ambassadors of your families, you should therefore dream big and achieve extra-ordinary things in the right way,” she told graduands.

Executive Secretary, Tertiary Education Commission (TEC), Dr. Joseph Sherman Kamara, commended the University administration for having acquired university status as well as the building being erected in the college compound.

He said Africa has always been left out in the past three industrial revolutions, noting that this is the fourth industrial revolution for which he is beginning to see signs that Sierra Leone will not be left out. He urged the University authorities to ensure that they serve the interest of the public.

Ibrahim Tarawallie, a graduand in Development and Economics, said he remains forever grateful to God and a media owner whom he said helped him in acquiring his dream of acquiring university degrees. He told Awoko Newspaper that had earlier had challenges in his first year owing to the fact that he had to balance work and the university commitment. “it is only with hard work and commitment that I was able to achieve this very deserved victory,” he said.

Best male Student, Issa Bangura, said he is overwhelmed upon receiving an award as best graduating student with a degree in Network and Tele-communication. “The secret behind my success is not unconnected to my hard work and commitment to the academic process,” he said.