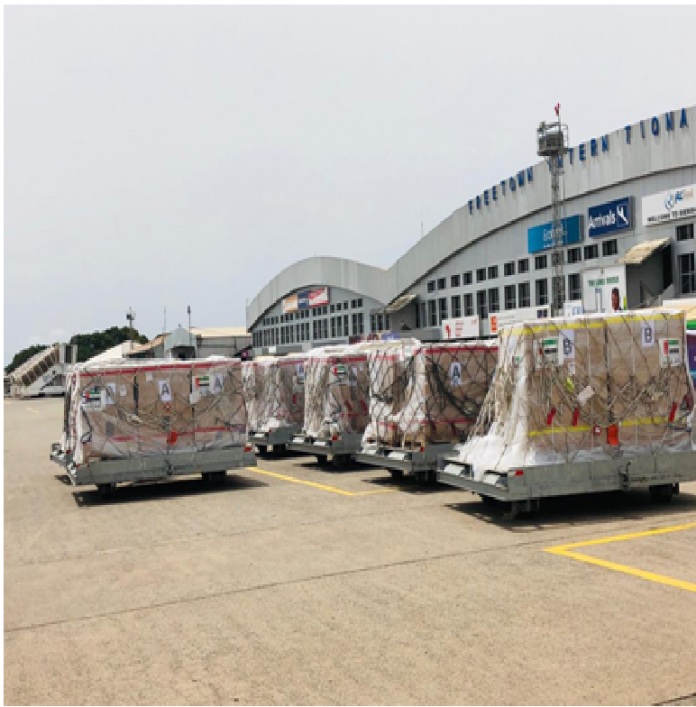 Sierra Leone’s Resident Minister North-West, HajaIsataAbdulai Kamara has received 54 pellets of assorted food items from the Government of the United Arab Emirates (UAE) on behalf of the Government and people of Sierra Leone.

The assorted food items estimated at the cost of millions of dollars arrived yesterday at the Freetown International Airport (Lungi) as good gesture to the Government of Sierra Leone from the UAE Government.

The 54 Pellets assorted food items which was loaded in one of the biggest cargos from UAE comprises cooking vegetable oil, flour, rice, fish, beans, milk, tea, salt, macaroni, sugar among other food items.

After receiving the items, HajaAbdulai-Kamara said this is part of the payback time for Sierra Leone during the first year in office of President Julius Maada Bio’s travelling which some Sierra Leoneans raised concerned on.

She noted that even though the donated food items will not be enough for all Sierra Leoneans, but that those who will be fortunate will get access to it.

She said the items came at the time when Muslims are performing one of the five pillars of Islam which is the Holy Month of Ramadan and that they constitute 70% of the population.

She extended her sincere thanks to the Government and People of UAE and also Sierra Leone’s Ambassador to the UAE, Rashid Sesay, whom she said has been working tremendously for the growth of Sierra Leone.

She also thanked the UAE on behalf of Ambassador Rashid Sesay, and thanked the UAE leadership for their goodwill and their continuous support to Sierra Leone noting that it is a testament of the tremendous progress that have been made over the years in terms of strengthening the friendly relationship between Sierra Leone and the UAE.

It is worth noting that the UAE has been a supportive partner to the Government and people of Sierra Leone, especially in the areas of education, healthcare delivery and agriculture.

The donation of the assorted food items from the UAE to Sierra Leone is a sign of extending humanitarian assistance to the West African State during this Holy Month of Ramadan.