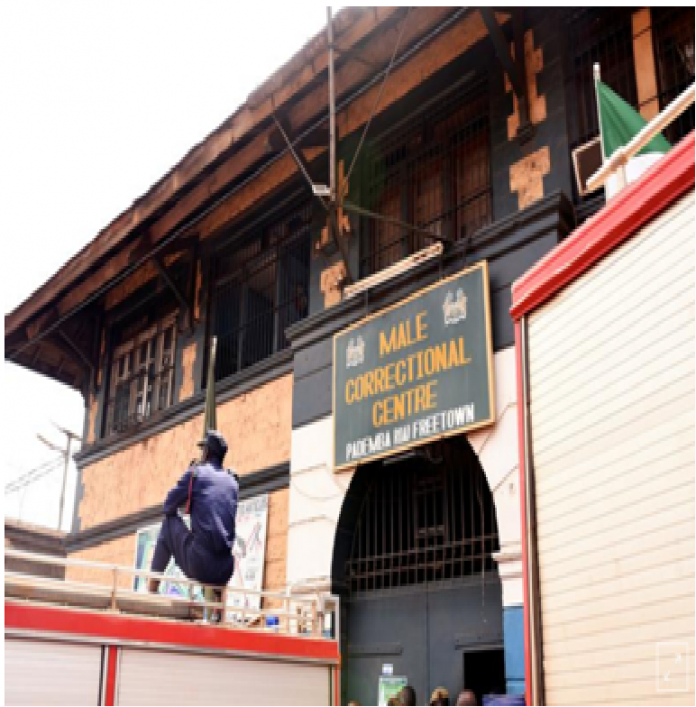 An investigation was conducted to find out the causes of the rioting, assess the damage caused as a result, determine the number of casualties, and to make recommendations that would prevent such disturbances from happening.

On 8th July, 2020, Officers of the Freetown Correctional Centre came out with a report identifing overcrowding in the correctional centre as one of the major causes of the riot.

Pademba Road Prison was opened on the 14th March 1914, by British colonial authorities to cater for a maximum of 324 inmates.

At the time of the rioting there were over 1,000 prisoners at the prison, which according to the report of the Correctional Centre is 400% overcrowded.

The Report said staff shortage at the facility was also another factor that caused the riot. It furthered that the prison is 40% understaffed which is insufficient to provide adequate security for the entire facility.

The Report further states that there was staff recruitment underway, but the COVID-19 outbreak brought the process to a halt.

According to the Report, the reported COVID-19 index case found at the prison, led the prison authorities to impose a ban on movements in the prison, to prevent the spread of the virus among inmates.

This decision the Report went on, was angrily received by the inmates which contributed to the eruption of the riot.

The Report also mentioned the decision by the Chief Justice to suspend court sittings as another possible causative factor for the disturbances at the prison, as was the closure of the retail outlet within the precinct of the prison.

According to the Report, the riot started around 7.30 am and ended at 11 am on 29th April 2020, causing significant damage to the workshop, stores and other buildings.

The Report also states that rival prison gangs clashed, attacking one another. This, the Report says may have caused the number of casualties to rise. As a mitigation measure to control the violence, the Authorities said that police officers fired teargas into the prison facility but to no avail, thus prompting the intervention of armed military personnel.

According to the Report, the military used reasonable force to control the rioting. However, the high number of dead prisoners and those injured have brought into question, the use of live ammunition to stop the riot.

There were calls for an independent, judge led investigation into the rioting at Pademba Road prison and the massacre of thirty unarmed prisoners by live bullets fired by armed military personnel believed to be presidential guards.

The Reports also failed to address question about why ruling party executive committee members and senior government ministers were present at the prison just hours before the start of the rioting. Why were they there?

This is a summary of the findings of the report presented by senior prison officers at a press briefing:

Overcrowding; Pademba road Correctional Centre houses all categories of inmates (especially high risk); On that day, there were 1, 300 inmates (400% overcrowding), in a centre built to hold 324 inmates; Staff shortage (40% under strength); Covid-19 outbreak prevented recruitment, which was in the pipeline; Index Covid-19 case led to drastic measures instituted that restricted movement within the facility; Suspension of court sittings; Closure of the tuck shop (retail outlet within).

Started around 7:30 am and ended around 11am; Inmates damaged workshop doors and set stores and some other buildings on fire; ️held some officers hostage, and pelted stones at officers; rivalry between inmate groups within the centre clashed and wreaked havoc on themselves; OSD personnel initially fired teargas into the centre to restore calm, but failed; armed personnel forced their way in and used reasonable force to restore calm.

Stores, catering, reception, hospital, and workshop (Le 20 billion); inmates refused to yield to orders to return to their cells

The setting- up of a riot command post; Psychosocial support to affected persons; Multi-sectorial engagement to ensure better reforms in the SLCS.