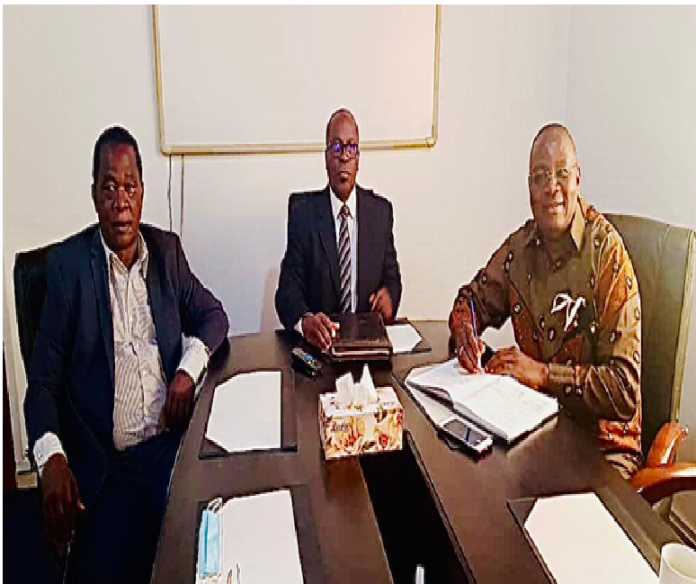 The powers of authority at the N’jala University have changed hands from Mallam O, outgoing Vice Chancellor and Principal (VC&P) to Prof Andrew Baimba as the University’s incoming VC&P.

The incoming and outgoing Acting Vice Chancellors and Principals held their first meeting presided by the University’s Pro-Chancellor.

This month of June will therefore be utilised by the three Njala leaders for a seamless transition.

“I have full confidence in the bongolised NU staff of today,” said Mallam O. as he briefed his successor on some of the key ongoing and planned activities.

Prof. Baimba thanked and congratulated Mallam O. on his achievements and said he took this as a national call to him to serve his institution again, one he cherishes so much.

The Pro-Chancellor beamed with smiles through and through as he sensed the potential of a successor who will continue to work with him to push some of the initiatives he had started under Mallam O.

Prof Baimba is expected to start his tenure on July 1st.

Speaking during the launching, Deputy Leader, NGC in Parliament and NGC North-West Regional Chairman, Honorable Foday Mario Kamara of Constituency 057 said the micro finance scheme is geared towards alleviating the economic hardship on women in the district.

He said the NGC as a party that has great concern for its members and Sierra Leoneans, decided to go all out to make this micro finance opportunity available to the people of Kambia.

He furthered that the launching of the Micro Finance Scheme in Kambia district is just a start and that there are plans to extend it to other parts in the country.

Speaking to newsmen, the Executive Director NOVA Salone, Marie Jalloh said fifty women in Kambia district have already benefited from the scheme, adding that this is just a start, as there are plans for more people to benefit from this scheme.