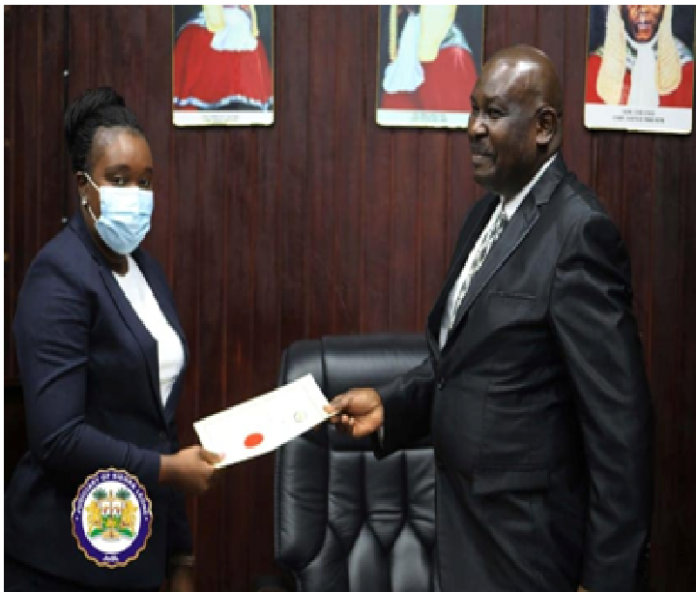 The President of the Residual Special Court for Sierra Leone, Honourable Justice Jon Kamanda and five other successful lawyers with reputable standing at the Bar have subscribed to the oath of a Notary Public before the Honourable Chief Justice, His Lordship Justice Desmond Babatunde Edwards.

In exercise of the authority vested in him, the Hon. Chief Justice has the power under Section 2 of the Notaries Public Act, Chapter 13 of the Laws of Sierra Leone, 1960 to appoint fit and proper person from the Sierra Leone Bar of over ten years standing as Notary Public and the same to perform the duties and exercise the functions of such office anywhere in country.

Speaking at the occasion, the Hon. Chief Justice referred to the appointees as officers of the Court, stressing that their tasks require a high sense of ‘probity and integrity’ in the execution of their duties.

“You’ll be required to validate signatures, documents, oaths and affidavits of witnesses as well as witnesses’ declarations for outside use. It requires a high level of independence, integrity, impartiality, and fairness,’’ the Hon. Chief Justice said.

While he reposed confidence in the appointees, the Hon. Chief Justice urged them to consider their appointments as an “honour, respect and accolade” bestowed on them.

He said, “I have no doubt that those that I have appointed for this task fit the role and you’re going to do it with aplomb and dexterity and everybody will be proud of you. I have done you proud by appointing you as Notary Public and it’s left with you now to do us the honour in doing that job with effective and efficient deliberation.”

He was former Member of Parliament for Kono Central from 1982 to 1986 and Minister of State in the Ministry of Mines between 1982 and 1986. He was also Minister of Health in 1996 and former Managing Director of the National Diamond Mining Company between 1987 and 1992.

Justice Kamanda is a graduate from Fourah Bah College, then affiliated to Durham University and was called to the Bar Middle Temple Inns of Court in 1975 in United Kingdom.

Dr. Tuma Adama Jabbi holds an Honorary Doctor of Law Degree (LL.D.) and a Master Class Certificate in Business Management and Leadership from the Commonwealth University and London Graduate School. She also earned a Master of Law Degree (LLM), certificate and Diploma in Corporate and Business Law from the University of Central England in Birmingham.

She also holds a Bachelor of Law Degree from De Montfort University in Leicester, United Kingdom and a Barrister at Law (BL) from the Sierra Leone Law School. She lectures Revenue Law at the University of Sierra Leone, a course she pioneered and have written extensively in that area.

Dr. Tuma is the Sierra Leone Bar Association representative at the Council of Legal Education, the body responsible for Legal education in Sierra Leone and was recently reappointed by the President of Sierra Leone, Dr. Julius Maada Bio as Chairperson of the Board of Directors of the National Revenue Authority (NRA) for a second term. She is married to Mohamed Gento-Kamara and are blessed with beautiful kids.

Notaries Public are officials appointed not only to deter fraud but to serve the public in non-contentious matters including witnessing the signing of documents and verifying signatories and instruments such as probate of wills and conveyances among others. They are also authorised to authenticate documents such as Estates, Deeds, Powers of Attorney, Affidavits, Licenses, Contracts and Loan documents.

Thanking the Hon. Chief Justice on behalf of her colleagues, Dr. Tuma Adama Jabbi said they were gratified and extremely honoured for the confidence bestowed on them.

She assured the Chief Justice that they’ll uphold the core values of their profession to the best of their abilities as officers of the High Court.

She said: “My Lord Chief Justice, we’ll definitely make you proud. We’re also aware that we’re officers of the High Court of Sierra Leone and I assure you on behalf of my colleagues that we’ll definitely continue to uphold whatever values that we’ve been upholding in the past that brought us here.”