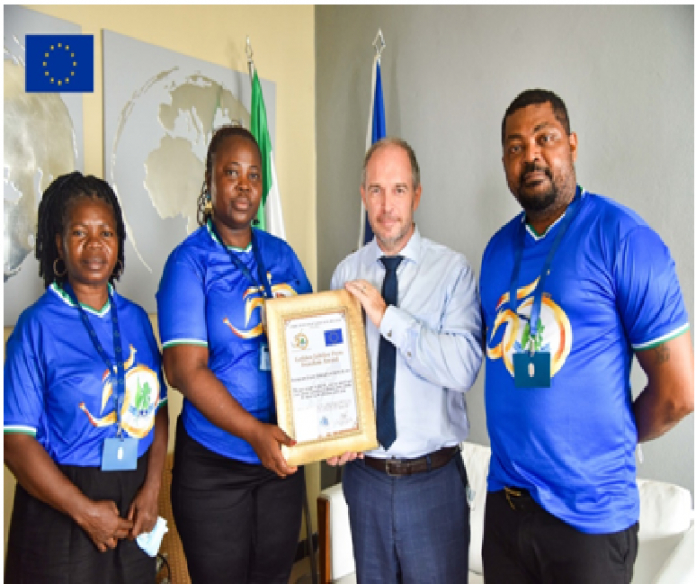 Yesterday, 9th June, 2021, the European Union (EU) Ambassador to Sierra Leone, Tom Vens received a surprise visit by the President and of executive members of the Sierra Leone Association of Journalists (SLAJ) at the Delegation’s Leicester Peak office.

The team’s visit was to present an award to the EU Delegation for supporting SLAJ and for advocating for the repeal of the Criminal Libel Law, which criminalises free speech and undermines press freedom in Sierra Leone.

The citation on the award reads: “For your support to SLAJ, and free speech and press freedom initiatives in Sierra Leone notably the repeal of the Criminal Libel Law.”

President Ahmed Sahid Nasralla while presenting the award and a survey report titled, ‘Impact of Covid 19 on Journalism in Sierra Leone’ said SLAJ recognises the significant role the European Union has played to the sustainability of peace, democratic governance,  protection of fundamental human rights and its overall contribution to the country’s development trajectory.

He said SLAJ and EU have collaborated on various projects in the past relating to supporting the training of journalists on the environment and climate change reporting, World Press Freedom Day symposium, EU Beach Clean-up event and  the recent disinformation campaign on COVID-19 among others.

He said these support have remarkably contributed to the development of journalism and the media landscape in the country, which SLAJ strongly recognises and appreciates as the association celebrates its golden jubilee this year.

Receiving the award, Ambassador Vens said the EU is honoured to have been considered for the award and appreciated the strong collaboration between the two institutions over the years, he however noting that EU was initially criticised for such collaboration as it was seen to compromise the independence of journalism, which has never been the case.

He said the EU provides broad support to CSOs including SLAJ to continue to build a professional media landscape, in view of the critical role journalists to ensure transparency and accountability in society.

He congratulated the President on SLAJ’s 50th Anniversary celebrations and expressed hope that the journey of press freedom and free speech will continue in Sierra Leone.

During SLAJ’s Annual General Meeting Golden Jubilee celebrations in Bo on Saturday 5th May 2021, Nasralla particularly commended the European Union for swiftly intervening by providing funds to SLAJ/IRN to roll out a bi-weekly nationwide radio and television programme specifically aimed at addressing fake news and misinformation around COVID-19 circulating on social media and messaging platforms.

The public education campaign which ran from June to October 2020, significantly contributed to fight disinformation on COVID-19, through the talk shows, the dissemination of myth busters, infographics and educational videos.

Since the outbreak of the Corona virus disease in Sierra Leone, there was a serious issue with false and misleading information circulating on social media platforms, which negatively affected efforts to contain the disease, because the public could not distinguish between the fake news and credible information on COVID-19, thereby undermining official guidelines.

The four months programme supported the crucial role of the media in providing the public with accurate and factual information during the COVID-19 crisis and in increasing social media literacy and responsible communication amongst the public.

The programme was also live streamed on the main television stations and EU/SLAJ/IRN Facebook platforms and further supported the National Response Plan pillar for communication and social mobilisation by relaying official COVID-19 updates, guidelines and practical advice to the audience.

President Nasralla said the programme was successful due to the involvement of a variety of stakeholders – including CSOs, medical practitioners, government officials, youth, women, key influencers and representatives of political parties who participated in the live talk shows – and the identification and debunking of recurring narratives circulating on social media related to COVID-19.

Until now, the European Union remains a strategic partner to Sierra Leone and has provided continued support, notably by repurposing its funding to CSOs in order to focus on epidemic containment and recovery measures and through various interventions in support of community initiatives.