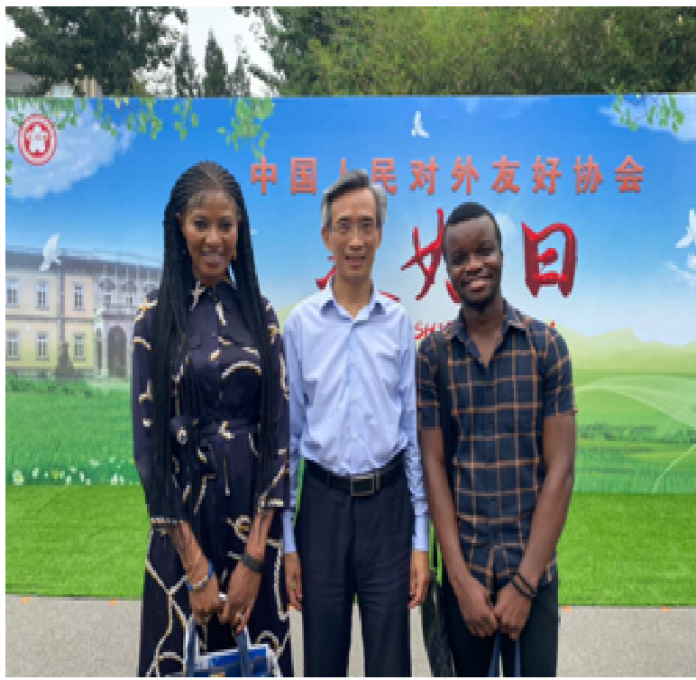 Sierra Leone China Friendship Association (SiLCHA) founder MariatuKargbopopularly known as Maria the Black Perl of China and a philanthropist was among other Sierra Leoneans that wererecognised in the presence of foreign Ambassadors that gathered in Beijing for a special day of China’s Friendship Day organized by the Chinese People’s Association for Friendship with Foreign Countries (CPAFFC).

The former residence of Rewi Alley (1897-1987), a New Zealand-born writer, social reformer and educator who spent 60 years of his life working in China, was reopened in Beijing on July 10.

“We want to tell Alley and all other international friends that their choice of impartiality is correct,” Lin Songtian, President of the Chinese People’s Association for Friendship with Foreign Countries (CPAFFC), said at the reopening ceremony.

The reopened in Beijing took the form of photos exhibition of people who have played their part in Chinese history were displayed which includes Sierra Leoneans.

The movement made important contributions to the Chinese people’s resistance against Japanese aggression and the victory of China’s new democratic revolution, said Lin.

“After the founding of the People’s Republic of China, Alley spared no efforts in supporting China’s development, promoting people-to-people friendship between China and other countries, and safeguarding world peace,” Lin added.

Many of China’s international friends attended the event, including 106-year-old Isabel Crook, who has spent most of her life in China teaching English and training talent, her son Michael Crook, Chairman of International Committee for the Promotion of Chinese Industrial Cooperatives, and Zhou Youma, the son of Lebanese-American doctor George Hatem.

Hatem, known as Ma Haide in China, was the first Westerner exceptionally approved to become a member of Communist Party of China (CPC) and obtain Chinese citizenship. Alley used to live with Hatem in a cave house in Yan’an, one of the most sacred places in China’s revolution, back in early 1939, according to Zhou.

Zhou scattered both Alley’s and his father’s ashes across the places dearest to them in China. “With my own hand, I sent them, two dear friends who forged a friendship through thick and thin, back to the land where they devoted their lifetimes to the Chinese people. This land became their final resting place.”

“Today, under the leadership of the CPC, we have realized the first centenary goal of building a moderately prosperous society in all respects and brought about a historic resolution to the problem of extreme poverty in China,” Lin said. “I believe our international friends can be satisfied with the CPC’s achievements, and proud of the choices they themselves have made.”

The Sierra Leoneans thanked the CPAFFC for their recognition and for also considering them at all times.

In addition, July 10 also marked the first Friendship Day of China hosted by the CPAFFC. According to Lin, to introduce China and Chinese culture to international friends, CPAFFC in the future will host the Friendship Day annually, on the first Saturday of July.

After the ceremony, Lin took all international friends and representatives from various embassies into the CPAFFC’s yard to enjoy a variety of local snacks, artistic performances and other traditional cultural elements, and further introduced the history of CPAFFC and China’s people-to-people exchanges at an exhibition area created especially for the occasion.