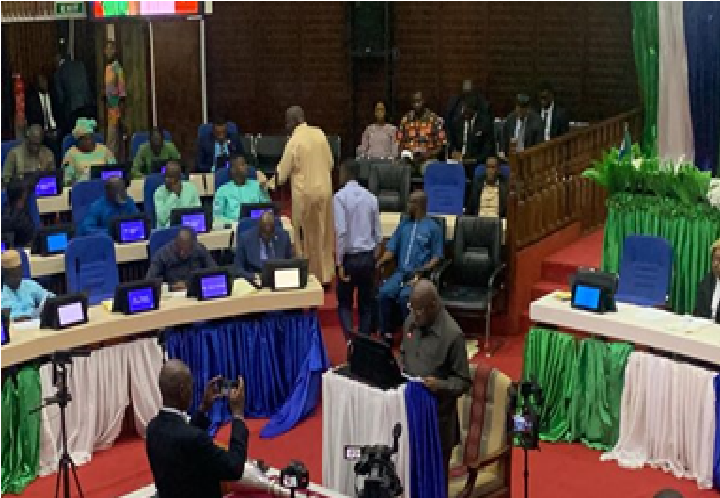 The Parliamentary Committees on Labour and Social Security and Legislative have conducted a pre-legislative hearing on employment and labour related bills in Committee Room One Parliament Building in Freetown.

The Employment Act, 2022, the Overseas Employment and Migrant workers Act, 2022 and the Work Permit Act, 2022 were the bills discussed by the joint committees and Ministry of Labour and Social Security as well as other stakeholders simultaneously.

Chairman Legislative Committee, Hon. Abdul S. Marray Conteh described the hearing as the first pre-legislative hearing in 2023 and thus be treated seriously in order to make good laws that would stand the test of time.

Chairman for the Committee on Labour and Social Security, Hon Hassan A. Sesay stated that the labour Bills are very crucial and if enacted into laws will be staying with us for years, adding that such Bills should be treated consciously.

The Leader Of the main opposition APC in Parliament, Honourable Chernor R.M Bah made it clear that Labour Laws cut across every facet of life and therefore, bills of such nature should not be looked at in a worry. He added that pre-legislative hearings are not legally binding but very important to hold such sessions as new ideas will emerge.

The Leader of Government Business, Hon. Matthew S. Nyuma informed all and sundry that the hearing was geared towards frank discussions from experts surrounding the bills before the actual discussions in the Well of Parliament. He further stated that workable laws are good for any nation.

Max Conteh, Secretary General for the Labour Congress recalled that the campaign to repeal and replace the absolute Laws started in 1996.

He pin-pointed that some of the old Labour Laws are not in favor of Sierra Leoneans to some extent and thus, the new bills if enacted into laws will cater to Sierra Leoneans, adding that, a lot of consultations regarding the various bills have taken place.

The Minister of Labour and Social Security, Alpha Timbo in his presentation talked about two bills (The Employment Act, 2022, and The Overseas and Migrant workers Act, 2022), while his Deputy Minister talked about the worker’s Permit Act, 2022.

Minister Alpha Timbo explained that some of Sierra Leone’s Labour Laws are weak and obsolete and thus need to be repealed and replaced.

The Minister of Labour and Social Security highlighted the main thrust of the proposed laws. According to the minister, the new laws would get a database of workers, address the issue of Contract workers, and leave entitlement guidance including paternity and maternity (From 12 weeks to 14 weeks).

The minister also informed that issues relating to terminal benefits or end-of-service benefits and labor Clearance certificates and apprenticeships, volunteerism as well as workers with a disability would be amicably addressed. He also told the audience that they are working in consolation with other partners.

Minister Alpha Timbo however disclosed that there are penalties for offenders or defaulters in the bills.

The Deputy Minister of Labour and Social Security highlighted the importance of the Workers Permit Act, 2022, and went on to inform that the said document is divided into five parts.

The deliberations were climaxed by questions and answers after the various presentations.