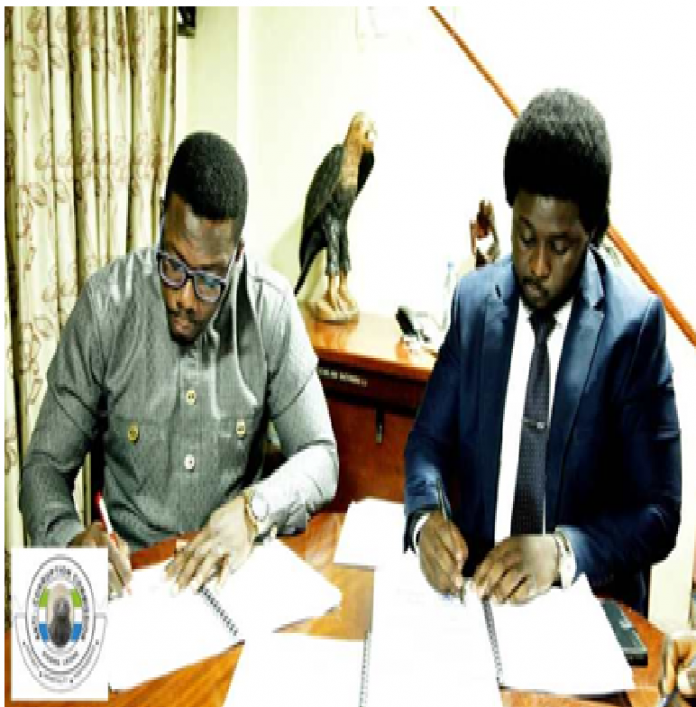 This historic event took place at the Conference Room of the ACC’s Head Office, 3 Gloucester Street, in Freetown.

The MoU signing climaxed a five-day study visit to the ACC Sierra Leone by the LACC led by its Acting Executive Chairman Counselor Kanio Bai Gbala, in order get first-hand experience of the operations of the ACC-SL.

Speaking at the event, Counselor Kanio Gbala said, he was very appreciative of the hospitality he and his team received from the Management of ACC-SL.

He said, countries like Botswana and Rwanda are performing well in the fight against corruption, but acknowledged that, in the recent three years, Sierra Leone is a shining example of a successful campaign against corruption. “What we have learnt so far will help build up the LACC and change corruption perception in Liberia,” he said, adding that it has been a rewarding week for him professionally and personally.

Counselor Gbala furthered that the signing of the MoU is the beginning of a very strong collaboration between the LACC and ACC-SL.

The Commissioner ACC-SL, Francis Ben Kaifala Esq. said, he was pleased to know that the LACC have had a fulfilling week and hope that what they have learnt will help them in their fight against graft in their country.

He said, the anti-corruption fight has been solely for the benefit of Sierra Leoneans. But, after receiving similar delegations from Uganda, other countries like Guinea and Somali-Land have requested for similar study visits to the Commission, then he realized Sierra Leone’s effort in the fight against corruption has received continental acceptability, he added.

He thanked the LACC team and assured them that the doors of the ACC-Sl reopen to them at all times.

Reading the citation of the MoU, Public Relations Officer ACC, Margaret said, the guiding principles of the MoU are that; “ACC-SL and LACC have considered their respective functions and mandates as mutually reinforcing, and have agreed to collaborate with the aim of accelerating the realization of an efficient, accountable and transparent public sector, capable of addressing the socio-economic challenges of Sierra Leone and Liberia.”

Also, at the signing ceremony, Commissioner Kaifala presented a dossier of anti-corruption documents, including IEC materials to the Acting Executive Chairman LACC.