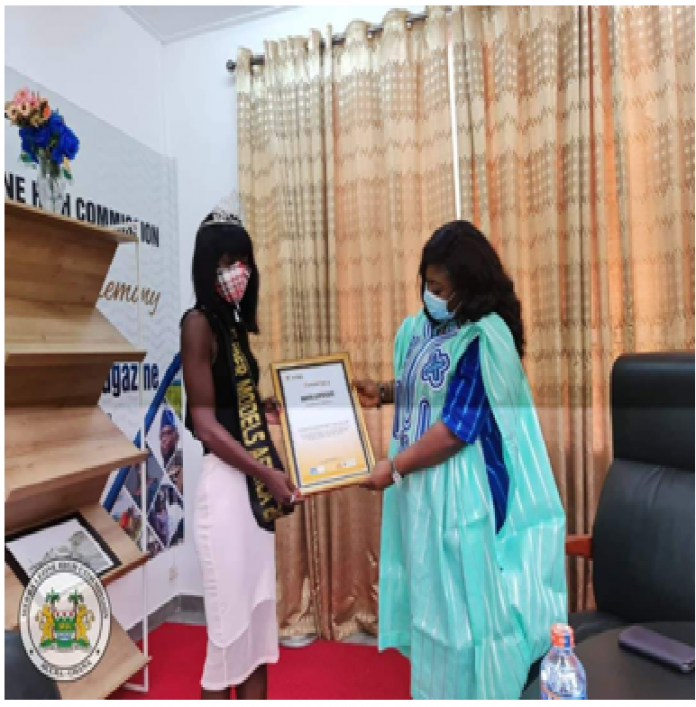 The first runner up at the just concluded Super Models Africa pageant 2021, Everetta Jestina Taylor has on Friday 30th April made a courtesy call on the Sierra Leone High Commissioner to Accra, Ghana at the High Commission.

Introducing the team to High Commissioner Francess Virginia Anderson, Julius Tucker a representative of the Sierra Leone Students Association in Ghana appreciated her for sparing time out of her busy schedule, so that she could meet with them while describing the second runner up as a Sierra Leonean Student of the Five star Fashion and Modeling University in Accra who fought very hard in making sure she flies the flag of Sierra Leone through modeling.

In her statement, Everetta Jestina Taylor who came second said she is happy that she was recognized alongside her country Sierra Leone, thus the reason she thought a visit to the Sierra Leone High commission was necessary.

She promised doing her best through her talent to ensure that Sierra Leone excels always.

Addressing them, Her Excellency Francess Virginia Anderson congratulated the team inclusive of the first runner up Sierra Leonean Everetta Jestina Taylor, Winner Ghanaian Abanga Christina Mmabun, and the second and third runners up for being brave in achieving the crowns they all have.

She said as young women they all should always carry themselves well while displaying not only their countries but also the continent of Africa, which they belong to.

Madam Anderson said such a step on the part of Miss Taylor is one that she should continue and in a positive way as her own contribution to her home while admonishing the ladies  to be steadfast in what they do while treading cautiously.

On the part of the High Commission, H.E Francess Virginia Anderson promised an open door to them and asked that they all work together as sisters of Africa

A representative of the Super Africa Models, Gladstone Kwawukume officially presented the certificate declaring Sierra Leonean, Everetta Jestina Taylor as the 1st runner up of the Super Models Africa Competition, to Madam Anderson who in turn handed it over to her.