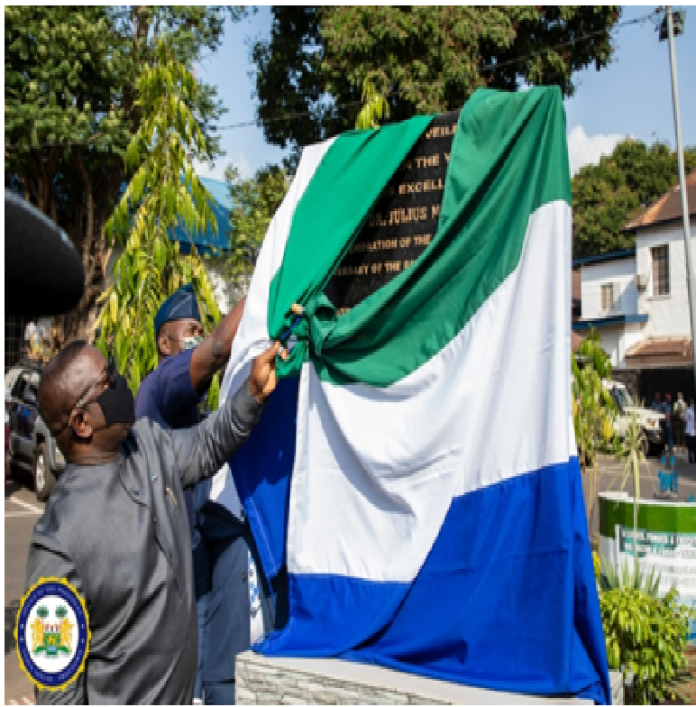 “Sierra Leone is the 5th most peaceful country in Africa with one of the lowest risks of COVID-19.” President Julius Maada Bio told the world.

He was speaking at the conferment of Sierra Leonean citizenship on 59 African Americans who traced their origin to Sierra Leone through DNA, telling them that home was indeed home.

“You have experienced the exhilarating beaches, the serene mountains, the exciting wildlife, and there is ever so more to discover. You are also surrounded by a rich history – a history that unites us; a history of our common ancestry.

“Even as you sit now, you sit on the original Fort Thornton. Walk out of those doors into the garden and look left (100 metres down), and you will see the Cotton Tree. It is older than the United States of America. It was where in 1792 the freed slaves prayed, rejoiced, and sang the hymn,” he said.

“We are putting in place more pro-business and pro-investment policies and incentives in place. We welcome you to acquire land, live in communities, build capacity, and start a new life without the worries of that other place. I am also aware of and very proud of the work of Free Yannoh Bangura, Dynast Amir, Dr. Adrienne Hunter, Dr. Sonya Bug-Alsoton, Karmen Thomas and many other brothers and sisters who are making an impact already in this country,” he said.

President Bio said his government was open to easing constraints around land rights, housing, investments, skills transfers, taxes as you make your decision to relocate here – whether permanently or semi-permanently,” he assured.

Minister of Tourism and Cultural Affairs, Memunatu Pratt, welcomed the African Americans and thanked them for returning to the home of their forefathers, adding that it was a distinguished honour to be in country to be given citizenship.

She said the people of Sierra Leone were hospitable and friendly and encouraged them to be loyal to the country and obey the laws and the oath of allegiance which they had subscribed to.

The African Ancestry Inc is an international organisation that helps people of African descent trace their ancestral roots back to a specific present-day African country and tribe or ethnic group.