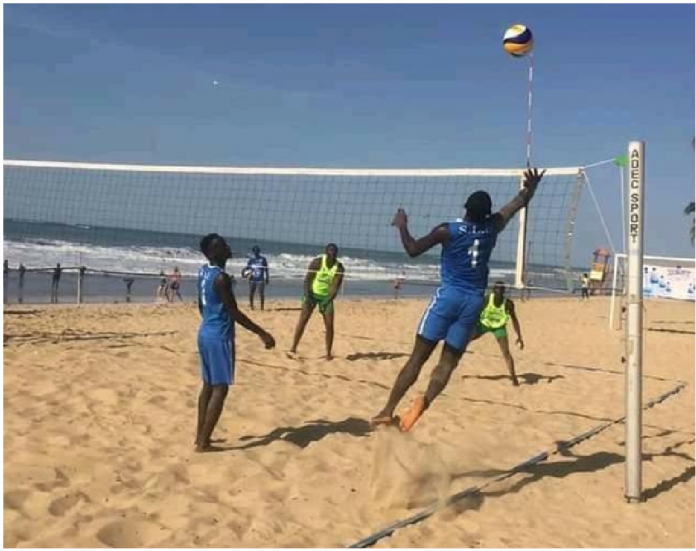 Players of the Sierra Leone National Beach Volleyball female and male teams who could not make it to the Toyko Olympics Games have demanded compensation from the National Sports Authority (NSA) and the Ministry of Sports for what they described as the Government’s failure to pay for their trip to Morocco for the Olympic qualifiers in June this year.

Ishmael Bangura, 25, a player with the male team confirmed to AYV that the failure to pay for both teams left them out of the Toyko Games, a competition that they had been training for since 2019.

“We need to be compensated. It is our right and we have spent some of our resources and time to prepare only to be told that we can’t travel because money isn’t available. It is not our fault and those who are in charge should take responsibility,” he emphasized.

The Sierra Leone Beach Volleyball Federation presented to the NSA a budget of around $42,000 (about Le420 million) to take care of the teams’ participation in Morocco covering the required resources for travelling, lodging and daily sustenance allowance for the delegation consisting of 4 female athletes, 4 male athletes, 2 coaches,1 head of the delegation and a medic.

According to sources familiar with the process, usually, the NSA would receive a budget from the sporting federations for onward processing to the Ministry of Finance who will provide the required resources to the delegation.

President of the Sierra Leone Beach Volleyball Federation, Ahmed Khanou who once served as Minister of Sports says they followed through all the processes with the NSA with onward engagement with the Ministry of Sports.

“We sent in this request and went into training to get the team in readiness. We did our bit and submitted to the government through the NSA with the hope of making it to the qualifiers,” he said.

Khanou also disclosed that the Federation is still looking forward to meeting with the Director of the NSA, Dr Kenneth Brima to discuss the issue and how such could be prevented in the future. “Compensation is one of the issues we will want to discuss with the NSA,” Khanou stated. He also indicated the Minister of Sports, Ibrahim Nyelenkeh is already willing to give this consideration a serious thought.

The NSA has said on public radio that they presented the budget to the Ministry of Finance for the National Beach Volleyball Team to travel to Morocco but the resources were not made available. On the demand for compensation, the Authority’s Head of Communications, Eric Fomba, declines to make an official comment on the issue but says they will react when the matter is officially brought to them.

Ishmael who is now serving as a coach for the National Under 19 players says his family has asked him to quit and that he couldn’t even watch the Volleyball events at the ongoing Olympic Games because it is difficult to sit and watch athletes he had competed against play.

“This is a dream killer, we are all devastated, its painful after all the energy, determination and time preparing for a global stage and we couldn’t make it due to lack of funds and through no fault of ours. It is disappointing, hurtful and bad,” he cried.

Meanwhile, Sierra Leone’s participation at the 2020 Olympic games ended after the disqualification of the Judoka Frederick Harris for being over the stipulated weight category, the failure of 100 meters’ sprinter, Margaret Barrie to qualify in her 100 meters’ heats as well as Joshua Wyse and TityDumbuya in the 500 meters swimming contest.