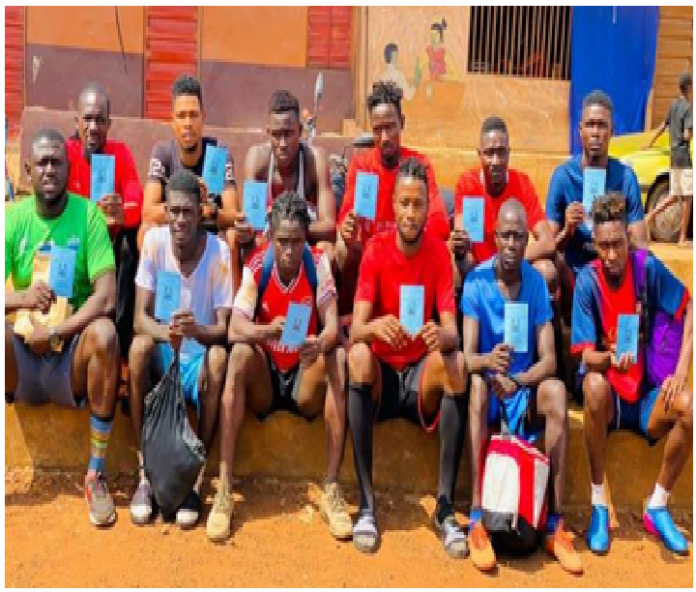 Sierra Leonean footballer Sonny Kamara had never considered having a Covid-19 vaccination until he had a stark choice – no jab or no job.

For when Sierra Leone’s football league resumed over the weekend, the directives issued by the country’s FA (SLFA) were crystal clear.

Anyone wishing to play or attend games must have proof of a Covid vaccination before being allowed to enter any stadium.

“I was afraid to take the Covid-19 vaccine because we’re hearing lots of negative stories,” the captain of Anti-Drug Strikers FC told BBC Sport Africa.

“I know of someone who took the jab and got seriously sick. But now that it has been made mandatory for us to take it, I had to comply.

“I was sick for three days after taking the vaccine as I was feeling dizzy and had a general body ache but I’m now ok and fit to play.

“I’m happy that I have taken the jab despite the side effects. I encourage those who are yet to go for the jab to go for it.”

Sierra Leone’s football community is still split by the ruling which is prompting all individuals – whether players, officials or fans – to have a jab, even if many had been against the idea beforehand.

Nonetheless, 12 of the 18 teams in the top division fielded sides at the weekend as the SLFA helped a campaign by the country’s National Covid-19 Emergency Response Centre (NaCOVERC).

Kamara’s attitude was echoed by Victor Lewis, the owner and chairman of East End Tigers FC.

“I’m taking the jab for two reasons – firstly, because it has been made mandatory and secondly, to give confidence to my players to go for it,” Lewis explained.

“But let me state this – it would have been difficult for me to take the vaccine (otherwise) because NaCOVERC hasn’t done enough to convince me.”

Executive chairman of Bo Rangers, Babadi Kamara, felt having the vaccination should have been a personal choice.

Sierra Leone has recently intensified its Covid vaccination programme nationwide in a bid to strengthen protection against the virus.

According to the latest government statistics, over 6,000 people have been infected with coronavirus in Sierra Leone, with more than 120 deaths.

“Vaccination should be voluntary,” Babadi Kamara, chairman of Premier League leaders Bo Rangers, told BBC Sport Africa. “I have taken two doses and have encouraged my team to comply but it will not be mandatory.”

His stance was backed up by Central Parade FC official Noel Horten.

“To take the jab has to be an individual decision as we believe that vaccination should be voluntary,” he insisted. “We’ll not force any player to be inoculated.”

The ramifications are of course that anyone refusing to take the jab will be unable to attend games, whatever their capacity.

“I have doubts about fans taking the vaccine and if they refuse, they can’t be allowed to access match venues,” said East Ends Lions’ secretary Abdul Karim Kabba.

“I have to be very honest – it would have been difficult for me to take the jab had it not been made compulsory,” added a man who has received his.

“Many people are skeptical of the vaccine due to negative messaging.”

Conversely many players are of course happy to have the vaccine, including Ports Authority FC skipper Mohamed Lamin Bangura.

“I have no problem taking the jab. I was just waiting for the right time to take it and this is the right time,” he told BBC Sport Africa.