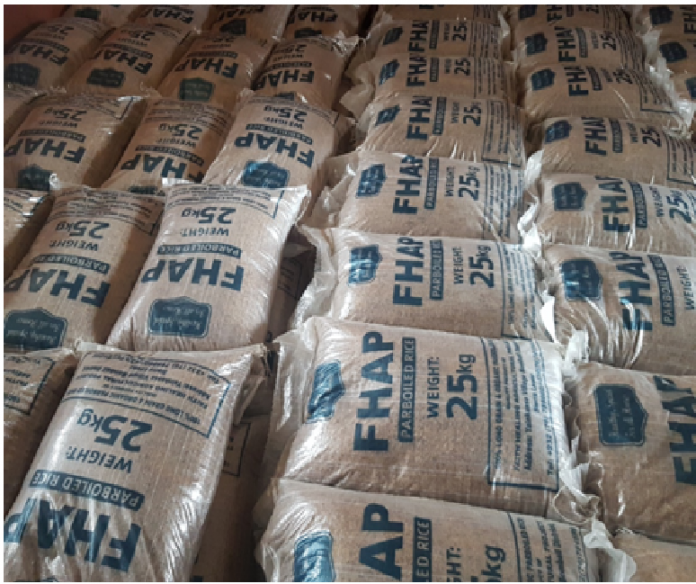 A farm project that started with hoes and cutlasses on a three hundred and fifty (350) acres of land in 2004 at Yainksa, just after the disarmament is today one of the biggest rice farm project in the country, producing one of the best and freshly grown organic parboiled rice grains in 25kg and 50kg, harvested in over 1,000 acres of land and well processed this year with the aid of a Wingin heavy duty De-stoner machine, Iron Roller rice mill machine and a newly constructed Milling house, launched on the 21st May, 2021 by Pastor Francis A. Mambu.

The Director of Faith Healing Agricultural Farm Project (F.H.A.P), Pastor Francis A. M. Mambu in his statement during the launch of the Milling house stated that it was because of the strains of the people in having to travel long distances to go and mill their rice that necessitated the building of the milling house. Adding that his vision is a national one to see that each district has its own rice farm, which has started already, as this year F.H.A.P planted over two hundred and twenty (225) acres of rice in Bonthe, Moyamba, Tonkolili, Kailahun district have also started.

Director of F.H.A.P Pastor Francis A. M. Mambu, a renowned farmer/preacher stated further that the farm project is supporting over 450 women in seven (7) villages in Bombali district; Royeama, Maronko, Royanka, Woreh-Yeama, Yainkasa and GbomSamba, and Madrissa not just with seed rice, ploughing for their farms etc, but also with cash in the micro finance boxes representing each village as start-ups to help settle other family needs.  Adding “there are 6,550 chickens this year in the poultry expecting to start laying eggs in July.”

While thanking the chief of Yainkassa and other important people and organisations that are extending supporting hand to the farm, Pst. Mambu highlighted the challenges faced by the farm, such as tractors, finance and other farm machinery, as his vision is to extend this farm project to every district in the country. He craved the support of the government to be able to undertake such a project. “Sierra Leoneans really want to farm but it is the support that is absent,” He averred.

Andrew A. Mansaray, District Agriculture Officer (D.A.O) of the Ministry of Agriculture, Bombali District, who served as chairman of the program, expressed gratitude on behalf of the Ministry and profusely thanked the Faith Healing Agricultural Project (F.H.A.P), for launching the rice mill House and Machines which he stated is a complement to the Government’s efforts towards developing the agricultural sector in the country and in making the life of the community people better.

He stated that he has noted the constraints highlighted by the Director of the F.H.A.P farm, and guaranteed his fullest support as the newly posted (D.A.O) from the Ministry of Agriculture to Bombali district.

The Chief of Yainkassa village, Abdul Koroma and the chairlady of the women groups Zainab R. Kamara profusely thanked the Director and CEO of F.H.A.P, Pa Mambu for putting the name of his village to the map and the farm which has contributed to making their lives better, and also added their voice to the call on government, local and international non-governmental organizations to support the Servant of God, Pastor Francis A. M. Mambu.

Honourable Member of Parliament for Constituency 032 in Bombali District, Hon. Dr. Mark Mahmoud Kalokoh expressed appreciate to Pa Mambu and profusely applauded F.H.A.P for such development initiative and urged Government to support the F.H.A.P with machineries which will make their work easy as he officially commissioned the rice mill building and machines to climax the program.