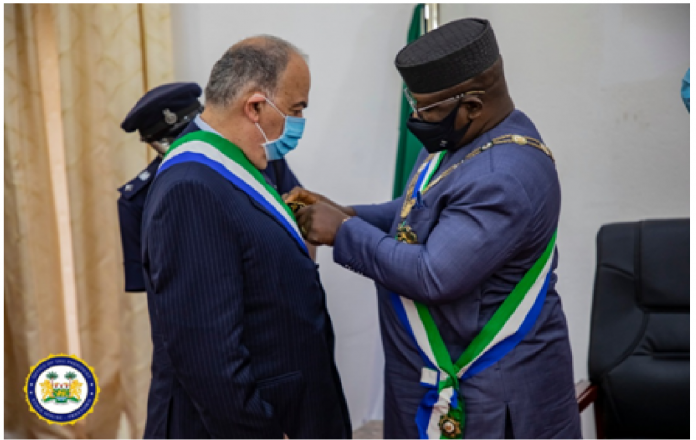 His Excellency President Dr Julius Maada Bio has honoured Professor Mohamad Jawad Khalife, a Lebanese citizen, with the most distinguished recognition in the country, the Grand Commander of the Order of the Republic of Sierra Leone for his exemplary service to professional medical training and practice.

According to the citation, read out by Dr Patrick K. Muana, Senior Adviser to President Bio on Strategic Communication, DrKhalife was also being recognised for his outstanding leadership and unwavering commitment to transforming the health sector in your country and for sterling contribution to promoting excellence in medical research, training, and cooperation.

DrMuana also declared while referring to DrKhalife that: “You have persisted at the cutting edge of medical practice in Lebanon and in the region as a whole. You are highly respected by your peers and for that you have earned befitting honorary fellowships of the Royal College of Physicians and the Royal College of Surgeons in England. In the world of academia, you are highly respected, cited, and your leadership is inspirational and highly sought after.

“In public service as Minister of Health in successive governments in Lebanon, you provided peerless leadership in overhauling public healthcare service delivery by developing and managing an innovative health reform plan that ‘guarantees a mandatory public national health insurance system to every citizen.’ You were also instrumental in establishing a registry that oversees the quality and pricing of pharmaceuticals in Lebanon as well as launching the first-ever official National Cancer Registry.

“You also facilitated a programme of affiliation between public hospitals and universities and educational institutions that significantly augmented the quality of healthcare delivery in Lebanon. Sierra Leone now salutes you for your achievements and your commitment to supporting the human capital development priority of our nation through training and research”.

In his words of appreciation, Professor Mohamad Jawad Khalife thanked President Julius Maada Bio, saying that he had always had high admiration for him, not just because he was President of Sierra Leone, but because he was passionate about the wellbeing of his people.

Professor Khalife further stated that Lebanon and Sierra Leone had a long history of friendship, and promised to work very closely with the authorities for a deepened partnership that would be beneficial for the citizens of Sierra Leone.

“Your Excellency, I am very grateful for this award from you and the people of this great nation. I will do my best for a strong partnership that will be for the interest of this country,” he stated.