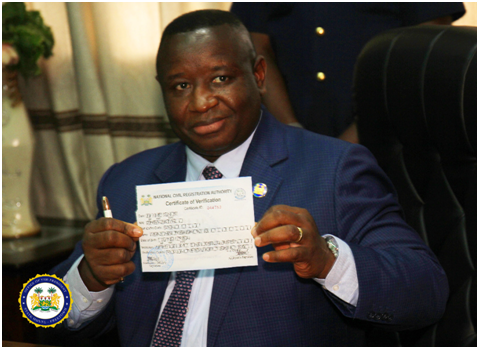 His Excellency President Dr Julius Maada Bio has called for a sustainable partnership when he addressed a roundtable of stakeholders in the energy sector, saying Government spent in excess of Le140 Billion to subsidise electricity supply in 2020 alone.

“I am concerned about the pressure on Government finances, but I believe that we can collaborate as partners to find a sustainable financial model that will serve us in the long-term. Since the COVID-19 pandemic struck, partner and foreign funding sources to support the energy sector have dwindled somewhat. But the need for available and affordable electricity has not diminished,” he said.

President Bio declared that the overarching intent of their meeting was “to discuss and assess the key issues and challenges of the sector, and agree on priority areas for intervention, through a collaborative effort of the government and partners,” in ways that aligned with the policy direction they had mapped out as a government.

He said they had identified priorities for the sector because they believed that reliable, affordable, accessible, and clean power was critical for the development of the country’s economy. He noted that in addition to supporting his government’s human capital development priorities, they also recognised that enhanced energy security would support investments, which in turn would create opportunities and jobs.

“A greater proportion of clean energy in the mix especially for rural-off-grid areas also supports climate change resilience. Toward those objectives, our partners have generously supported initiatives to deliver reliable electricity. Permit me to identify a few of these initiatives: The unbundling of vertically integrated NPA to create EDSA, EGTC, and EWRC; the implementation of standard operating procedures and metrics for EDSA with the support of the World Bank Management Contractor.

“The expansion and strengthening of the Freetown distribution network through the World Bank-sponsored Energy Sector Utility Reform Project; the ongoing Bo-Kenema Transmission and Network Rehabilitation Project; funded by FCDO and AfDB; the MCC supported Threshold Program, (2016 – 2021) which introduced and facilitated the Energy Roadmap; the FCDO sponsored flagship Rural Renewable Energy project, which is the gold standard for mini-grid installation and regulation in the sub-region,” he said.

He particularly singled out the launch of the District Headquarter Town Electrification Project, a flagship of the New Direction Administration, where in Phase I, the Government provided funding for overhauling the distribution network in seven towns that had been without electricity for decades.

“Bonthe, Matru-Jong, Kambia, Kailahun, Kabala, Moyamba and Pujehun. The generation component and grid connectivity to these towns will be funded through the World Bank’s Enhancing Sierra Leone Energy Access Project.

Permanent Secretary at the Ministry of Energy, Raymond Tamba Gbetuwa, earlier stated that the 2-day roundtable discussion would also serve as a forum where the ministry and its partners would look ahead for future energy development and opportunity.

Country Director for Millennium Challenge Corporation, MCC, Matthew Langhenry, congratulated President Bio and the country on the Compact Program and urged the govt to expand on energy to open opportunities for investments, schools and hospitals.

He further encouraged stakeholders to emphasise planning in ways that would help improve development and assured of the continued support of the MCC and the government of the United States of America.

Finance Minister, Jacob Jusu Saffa, said he was happy to be part of the discussions and thanked the leadership of MCC for their support to the government, in particular the energy sector.

He further disclosed that they had fully supported the energy sector before and had provided non-cash subsidies in the form of duty and GST waivers, including the financing of the phase one rural energy development project.

Minister of Energy, Alhaji Kanja Sesay, said the presence of His Excellency Julius Maada Bio at the opening of the roundtable discussions was a show of his commitment to revamping the energy sector.

He added that the discussion would focus on priority sector issues, marking ways forward with initiatives that support the requirements of the MCC Compact.

“Sierra Leone is a recipient of funds from international donors for the electrification of towns project. The government is committed to building partnerships with private sector players to ease the burden on the government,” he said.