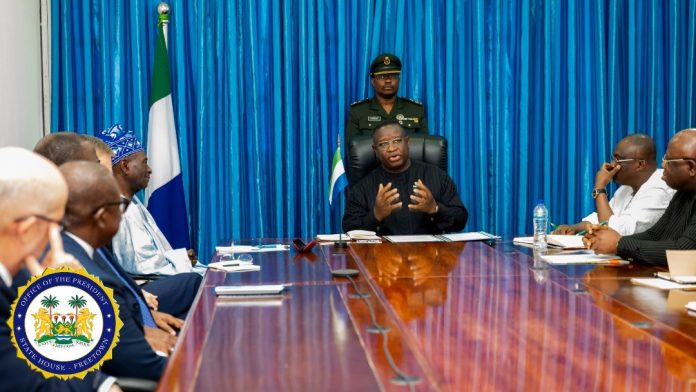 His Excellency President Dr Julius Maada Bio has received the Executive Board of the United Nations International Fund for Agricultural Development (IFAD), which was visiting the country to take stock of their interventions in the sector.

Presenting the team, from the largest and most active donor in Sierra Leone’s agricultural sector, Minister of Agriculture, Abubakarr Karim, said the visitors had been to some parts of the country in the few days to engage different partners and to also see how their funds were being utilised.

He noted that this was their first such visit but IFAD’s investments in the sector was aligned with the government’s initiative to prioritise agriculture, adding that as donors they had also ensured a reliable and sustainable access to funding by farmers in the country.

Spokesperson for the delegation, Dr Yaya Olaniran, disclosed that they had fruitful exercises, as they had been in the country to see firsthand the impact of their investments in agriculture, adding that those interventions included producers, public private partnerships and involved more women as producers.

He went on to state that among many other things they saw enthusiasm in the school going children under the President’s Free Quality Education programme, and pledged IFAD’s continued support and commitment to the government and people of Sierra Leone.

In his response, President Julius Maada Bio welcomed the Executive Board of IFAD, on behalf of his government and people of Sierra Leone, adding that they were visiting at a critical time when his government was planning on doubling its efforts on the agriculture and productive sectors.

He stated that food security was important and expressed hope that the team would add value to the process of achieving that feat and boost other areas in the agricultural sector.

He emphasised that agriculture would be the largest employer, help boost the socioeconomic growth of the country and stimulate broad based economic development, adding: “We must see agriculture as a revolution as we did on education”.