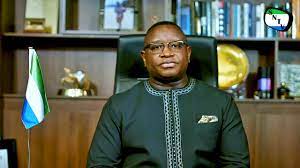 The President of the Republic of Sierra Leone, Brigadier (Rtd) Dr. Julius Maada Bio faced the toughest challenge in the history of Sierra Leone politics and has been the most vilified politician.  Despite the storm of nit-picking vilification he faced during the 2018 hotly contested Presidential election, he proved his critics wrong by winning the Presidency.

Interestingly, President Bio took over the country at a period of uncertainty and austerity and the people wanted a quick fix after a governance decadence of immeasurable proportion. Thankfully, His Excellency said he did not promise a quick fix of a broken economic country, rather he wanted to be judged at the end and not the beginning of his rule.

President Bio believes that leadership is about creating possibilities for everyone, especially young people. As such, his administration focuses on Human Capital Development, especially in the areas of Education, Agriculture and youths empowerment.

In the Free Quality School Education (FQSE) Programme, for instance, the Bio administration is creating the necessary environment in which a strong, high quality educational foundation is built for school pupils from the pre-school, primary to tertiary level to ensure that in two decades time, Sierra Leone would produce well-equipped engineers, scientists, doctors, lawyers and professors.

To actualise that dream, 2.5 million children currently enrolled in school and 21% of the national budget is being used to foot the bill of the FQSE programme, the largest budget ever in the country’s history. Apart from that, the government in collaboration with development partners is to provide teaching and learning materials and the implementation of school feeding programs across the country is ongoing. This government even paid backlog salaries of teachers that the previous administration failed to honour. Also, girls admitted into the Sciences of the various Universities receive full scholarship from the government.

In Agriculture, President Bio in June this year launched a $34.1 Million Regional Rice Value Chain project in Torma Bum to address the low levels of food security his government inherited from the APC. The project would directly benefit 7,000 women and youth farms, along with 35,000 farming families who are growing rice on 35,000 hectares of farmlands in the Southern province. Apart from the Torm Bum Rice project, President Bio has a 415 acres of farm land in Tihun Village, Sogbini Chiefdom in Bonthe District,  aiming to address food sufficiency in Sierra Leone.

On the fight against Corruption, President Bio appointed one of the brightest young lawyers, Francis Ben Kaifala with a responsibility to realise the vision of transforming Sierra Leone. When he took over as President, corruption was endemic in public sectorand the country’s international reputation had dwindled.

In less than a year, the Anti-Corruption Commission boss, Francis Ben Kaifala had a 100% conviction rate and recovered about $1.5 million of stolen money. That seed money was used to construct the country’s first-ever national medical diagnostic Center.

Under the Kaifala leadership, the Millennium Corporation Challenge gave Sierra Leone a green scorecard in curtailing corruption and multilateral development partners that had left the country are now returning again. The government of President Bio is determined to break the culture of corruption and impunity.

President Bio took over governance of the country under a very challenging economic conditions whereby real Gross Domestic Products (GDP) was on a downward trajectory, decreasing from 6.3 percent in 2016 to 3.7 percent in 2017. Inflationary pressurewere high with the year-on-year inflation at 15 percent at the end of March 2018. The fiscal situation was very challenging with low domestic revenue collection rates in the midst of high Government expenditures resulting in the widening of the budget deficit, which was financed mainly by borrowing from the domestic banking system leading to the accumulation of arrears.

Under the leadership of President Bio, the Ministry of Finance implemented a number of impressive measures aimed at correcting fiscal slippages that occurred in previous years to restoring macroeconomic stability.

This is the only President that believes Sierra Leone should no longer be defined by the stigma of the past, rather prides herself in what the future has to offer—hope and opportunity for all. It is but important to him that young men and women all across the country can imagine for themselves that they too can be part of this story of our country. That’s what transformational leadership is all about.