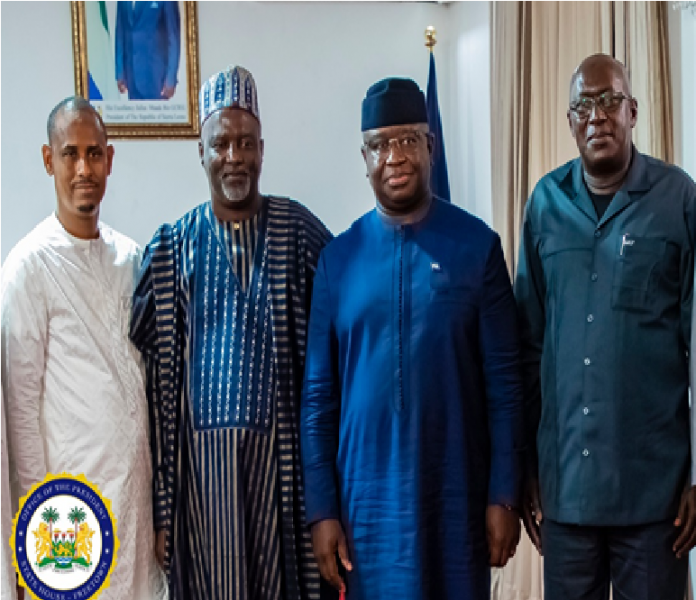 A cross section of representatives and Members of Parliament of the Economic Community of West African States, ECOWAS, has called at State House to pay a courtesy call on President Dr Julius Maada Bio and to congratulate him on his efforts at developing the country.

He added that their visit was also in appreciation of his leadership in the ECOWAS region, noting that the humility they saw in the first family of Sierra Leone was very impressive.

“Your Excellency sir, the progress made at the ECOWAS Parliament under the leadership of Rt. Honourable Mohamed Sidi Tunis is reflective of the development we have seen in Sierra Leone. He is a leader of excellence and a team player,” he noted.

In his brief statement to the visiting ECOWAS lawmakers, President Bio welcomed the delegation to Freetown, noting that the country and its people were very beautiful and hospitable.

“The unity in ECOWAS is a demonstration or manifestation of our intention to work together for the benefit of our region. We have gone through so many challenges. The ECOWAS Parliament is also an intentional structure meant to consolidate our integration. The more we are together, the more we understand one another and feel the pains and needs of others the better it will be for all of us,” he noted.

President Julius Maada Bio said humility was the hallmark of great leaders, adding that people in the sub-region were the same and that quite a lot needed to be done to gain economic freedom for member states of ECOWAS.

“Although we celebrate independence, but we are still not independent. We need to do quite a lot on the continent in the true spirit of African brotherhood to be able to have the independence we need and to realise the many things that we have. That is why we need to come together, share knowledge and compare notes to gain economic freedom,” President Bio asserted.