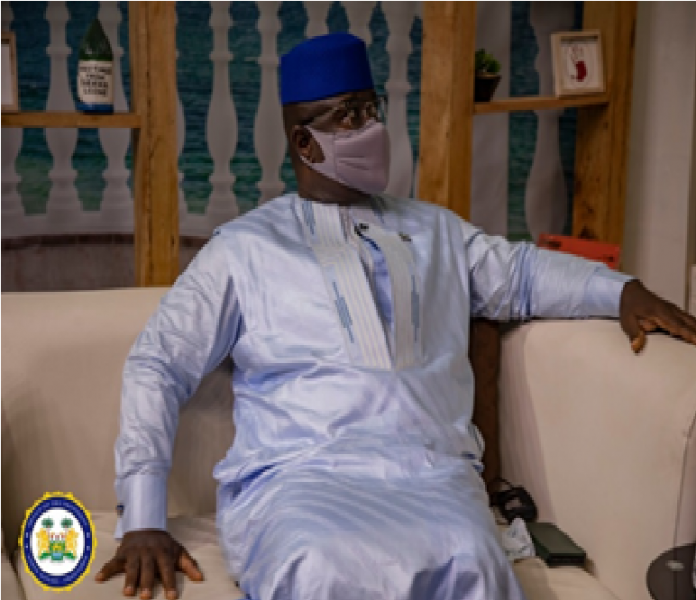 His Excellency President Dr Julius Maada Bio has called at the Sierra Leone Broadcasting Corporation, SLBC, and the Africa Young Voices, AYV television, to directly engage citizens on his government’s administration after 3 years.

Addressing journalists on live television programmes on AYV and SLBC, President Bio said that the state of affairs he inherited in 2018 posed many challenges for his government, adding that for a developing nation to be brought to the limelight its human capital should be completely revitalised.

“I introduced the Free Quality School Education to every part of the country. Every child must go to school irrespective of their origin and political affiliation. Government is paying fees for more than 2.5 million kids in the pre-primary, primary, junior and senior secondary schools in all regions. And we are making a steady progress by making sure that Sierra Leone regains the lost glory of being called the Athens of West Africa,” President Bio assured.

He also confirmed that for the first time in the history of the country more proactive steps had been taken to ensure that women and girls, comprising 50% of the country’s population, have a free space in society, adding that his government was willing to work with development partners in upholding the dignity of women and girls.

Furthermore, he said there had been massive and genuine efforts at fighting corruption.

“Our fight against corruption has been robust and we are making a steady progress. We are not there yet as a nation, but our collective work is helping our international reputation. For the first time in the history of this country, we have ranked the highest on MCC scorecards and subsequently we are now eligible for the compact programme. I, therefore, encourage all citizens to join the ACC to make corruption unfashionable,” he noted.

He further stated that there had been a steady increase in revenue mobilisation, saying that the introduction of the Single Treasury Account had been a major development in managing wasteful spending. “The outbreak of the Coronavirus didn’t only delay our development activities, but it also did to every country in the world. But as a nation, we have done a lot in the fight against