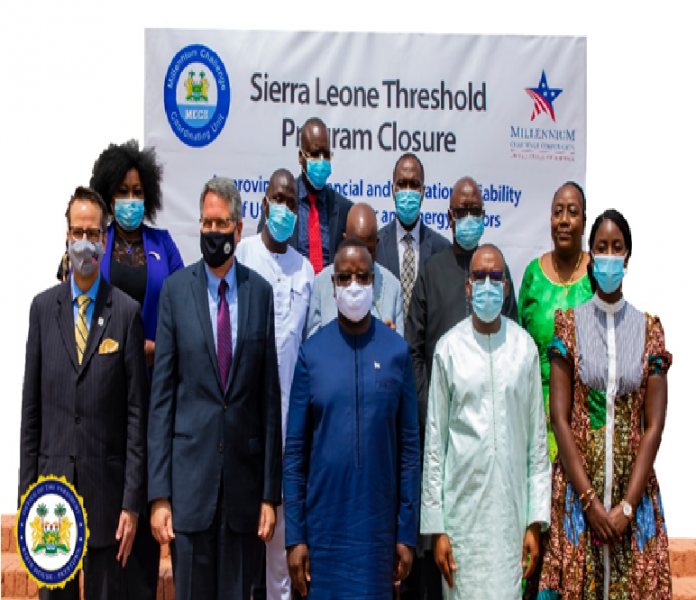 President Dr Julius Maada Bio has participated in the closure of the Threshold Programme of the Millennium Challenge Coordinating Unit, MCCU, at a ceremony at State House.

The United States Government’s Millennium Challenge Corporation, MCC, and the Government of Sierra Leone started their partnership on 17 November 2015 to implement a $44.4 million threshold programme to improve access to clean water and reliable electricity and to support reforms designed to limit opportunities for corruption.

Chief Executive Officer of the MCCU, Ndeye Fatu Koroma, said the closure of the Threshold Programme captured a joy of accomplishment, noting that the funding laid the foundation for the financially viable provision of water and electricity services, essential services for the people of Sierra Leone.

“The MCCU team, a band of young and bright Sierra Leoneans, was tasked with pursuing aggressive reforms in the electricity and water sectors. We were asked to influence policy, build capacity and shift entrenched business cultures to ensure that our people have access to basic services that are integral to human capital development and the economic transformation of Sierra Leone,” she noted.

Madam Koroma further stated that the team worked assiduously hard to deliver a successful Threshold Programme, the first success since the introduction of the programme in the country and which created the pathway of the eligibility of the Compact.

The United States Ambassador to Sierra Leone, David Reimer, congratulated Sierra Leone for the enormous progress made in confronting the challenges facing its people, saying that the government had made significant strides to respond to infectious disease outbreaks, raised spending on education, and increased the percentage of girls who completed primary school.

Additionally, he said action had also been taken to control corruption and combat trafficking in persons. These initiatives directly contributed to Sierra Leone passing the MCC scorecard for two consecutive years. He confirmed that he was confident that by continuing to work together, Sierra Leone would be on the path to a brighter future.

“The United States of America is and will remain a firm and steadfast friend of Sierra Leone. Thanks to our shared values – democracy, the rule of law, and individual liberty – and our historic ties of family and culture. We remain deeply committed to Sierra Leone’s success as a democratic nation and to the wellbeing of its people.

“From collaboration on peace and security, to support for the health system as you confront both longstanding health challenges and the current pandemic, the United States – and our Embassy here in Freetown – will work with you to build a more prosperous, peaceful and healthy future for all,” Ambassador Reimer noted.

“Your Excellency, upon assuming office, you placed the MCC under my direct leadership. You gave me three objectives: to oversee the successful implementation of the Threshold Programme, to improve on the performance of the scorecard and lastly to deliver a Compact.

Today we are witnessing the successful implementation of the Threshold Programme. As we close the five-year threshold programme, it should be noted that MCC decision to engage Sierra Leone in 2015 was a response to the Ebola crisis, to ensure that essential services are available to Sierra Leoneans, especially clean water and clean electricity,” he noted.

Vice President further said that even during the Coronavirus pandemic in the country, the threshold programme remained extremely relevant, adding that it attested to the criticality that led to the provision of clean water to the communities of Aberdeen and Kingtom, to add access to pipe born water for the citizens.