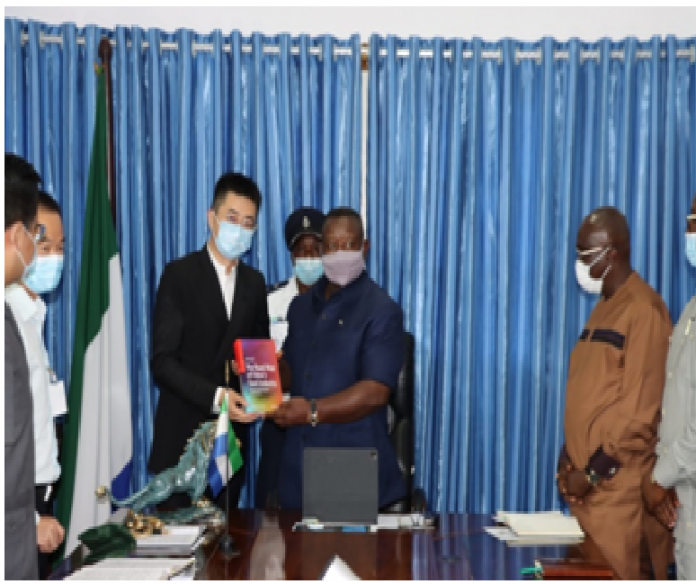 President Bio made this assurance during a courtesy visit on him at State House in Freetown by staff of the company who were led by the president of Kingho Energy Group, Colin Ding.

During his response to the presentation by the Company’s Director of Corporate Affairs and the statement by the Kingho Energy Group President, His Excellency President Bio said he was happy that the meeting brought everyone together to have a shared view on of the roadmap of the company in Sierra Leone.  He expressed joy that Kingho has started very well and thanked the company for not disappointing him.

President Bio emphasized that Government will do its parts to ensure that the programmes, vision and developmental aspirations of Kingho are mutually beneficial. He expressed optimism that he would truly look forward to the stage when Sierra Leone will be a hub for the production of steel in the sub-region. Therefore, the President assured that GoSL will give it supports to the company so that the company will actualize it goals.

On the area of Corporate Social Responsibility (CSR), the President of the Republic further assured that GoSL stands ready to help the company and will always be there to give its support. He said he is hopeful that the pledges made by the company will be adhered to and that the roadmap of transforming the iron ore mining industry of Sierra Leone will be a vision achievable during his tenure as President.

Meanwhile, the remarks of President Bio was a direct response to the statement made by the President of Kingho Energy Group, Colin Ding, who had earlier in the meeting spoke about the desire of the company to launch Phase II of its vision. Phase II, he said is to optimise the Tonkolili Iron Ore grade from 52% to more than 65% so that the company’s product will be globally competitive.

Mr Ding thanked the President and GoSL for the relentless support given to the company so far and assured that based on the trust and confidence bestowed on Kingho, the company will do all it could to transform the iron ore industry of the country.