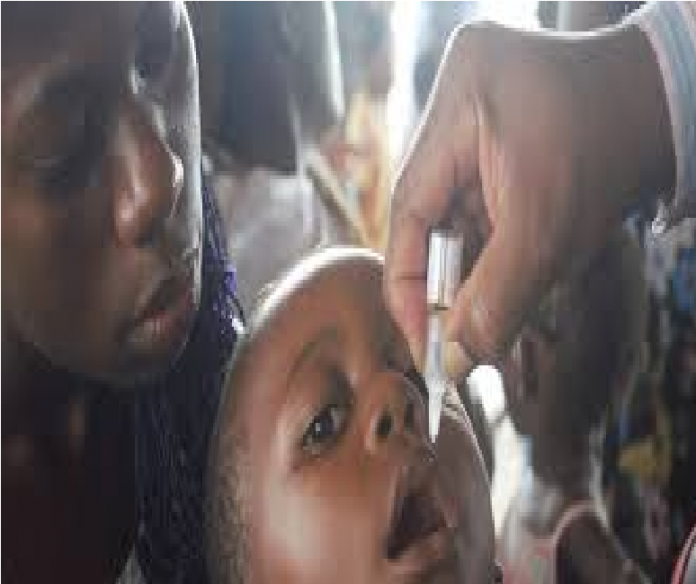 During this campaign, the Novel Oral Polio Vaccine 2 (nOPV2) is being introduced for the first time in the country. This vaccine is safe and effective and has been proven to provide better protection in preventing polio.
The Government of Sierra Leone, with support from the Centers for Disease Control and Prevention (CDC), Rotary International, United Nations Children’s Fund (UNICEF), and World Health Organization (WHO), has secured 4,920,000 doses of the novel Oral Polio Vaccine, (nOPV2) and targets to immunise a further 1,472,813 children during each of the two rounds planned to hold in May and June 2021.The first outbreak response is slated to hold from 28-31 May while the second round will  hold from 2-5 July 2021.

The campaign comes against the background of detection of 32 confirmed cases of circulating vaccine-derived poliovirus type 2 (cVDPV2), which were detected between December 2020 and May 2021.

With the COVID-19 emergency in 2020, many children in Sierra Leone below the age of 5 years missed their recommended doses of routine immunisation services including the polio vaccine on schedule putting them at more risk of getting the disease.

The presence of cVDPVs is a clear indication of declining population immunity due to suboptimal routine immunisation coupled with poor quality supplemental immunisation activities (SIAs) in previous years, leaving a significant population susceptible to Poliovirus infection.

“It is important that we move fast to prevent this outbreak from harming more children,” said Minister of Health and Sanitation Dr Austin Demby  “I entreat all parents to take their children for polio vaccination including children who have previously been vaccinated. It is safe to get a supplementary dose and we want to ensure every child is protected against polio in Sierra Leone.”

The circulating vaccine derived polio virus outbreak is being reported in 15 other African countries where responses to address the outbreak are also underway.

Polio is a highly infectious viral disease and children under five years of age are the most vulnerable.  It is for this reason that International health regulation dictates that just one polio case is classified as an outbreak, which requires a response to stop the spread to other children.

“This polio vaccination campaign is the key to stopping the new outbreak in Sierra Leone, and it is critical that all children under five years of age are vaccinated during both rounds,” says U.S. CDC-Sierra Leone Country Director, Dr. Tushar Singh, MD, (PhD).  “CDC is working alongside the government and partners to ensure every child is reached during this national effort.”

When a child is immunised with the Oral Polio Vaccine (OPV), components of the vaccine replicates in the intestine thereby developing immunity by building up antibodies. On rare occasions, if a population is seriously under-immunised, fragments of the vaccine passed into the environment can continue to circulate and can change genetically and, in very rare instances, can cause paralysis – this is what is known as a circulating vaccine-derived poliovirus (cVDPV).

“It is unacceptable for anyone especially for children to suffer from infections, disabilities or death from diseases such as polio, that are completely vaccine preventable. We must take advantage of the advancement in medical technologies such as vaccines to improve the quality of health for everyone everywhere,” said Dr Steven VelaboShongwe, WHO Representative in Sierra Leone.

Despite the current outbreak of type 2 polio virus in the country, the Ministry of Health and Sanitation, together with partners, have made great strides towards the universal immunisation of children against polio.  According to the 2019 WHO and UNICEF estimates of immunisation coverage, the percentage of infants who received their third dose of the polio vaccine, was at 95 per cent.

“Vaccination remains key to protecting children from harmful vaccine-preventable diseases, which include polio.  As we focus on the current COVID-19 vaccinations, it is also critical that children continue to have access to existing vaccines, which will protect them from death or permanent physical impairment,” said UNICEF Representative, Dr. Suleiman Braimoh.

Across the country, MoHS together with partners is therefore working to remove the barriers to immunisation, including improving the cold chain system to retain vaccines efficacy and also providing health care workers with the required skills and capacity to reach every child with lifesaving vaccines – regardless of where they stay or their economic status. At the same time detailed micro planning has been done to identify and map out high-risk populations that migrate through the West African Sub-region suspected to be responsible for the current cVDPV2 spread in Africa.