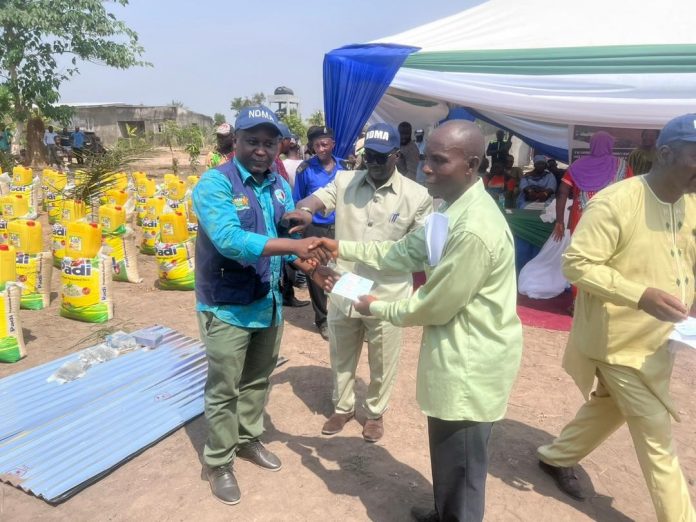 On 14th August 2017, Sierra Leone experienced massive floods which led to a mudslide at Mortomeh, destroying hundreds of buildings, killing over 1000 people and leaving more than 3,000 homeless.

The Government of Sierra Leone was able to establish a resettlement camp comprising 52 housing units at Mile Six through the support of three indigenous construction companies; Pavi Fort, Seacon and Gento Group – as gratis to the government for survivors of the disaster.

The housing units which lie on 206 Acres of Land, are under the management of the Sierra Leone Housing Corporation (SALHOC) and are being monitored by a committee comprising victims of the mudslide survivors.

Speaking at the commissioning ceremony, the Director General of National Disaster Management Agency (NDMA), Brima B. Sesay disclosed that it was a result of the intervention of the Sierra Leone Ambassador to Ethiopia, Ambassador Adekunle King that the AU, through its Solidarity Disaster Assistance Relief Fund, provided the funding for the project.

“The Sierra Leone Ambassador to Ethiopia, Ambassador Adekunle King advocated on behalf of the NDMA to the African Union for the provision of basic social amenities for the mudslide survivors. The sum of $99,975 was provided”, the DG disclosed.

He continued: “A community-based approach involving all stakeholders including SALHOC, mudslide survivors, and Ministry of Social Welfare, was used in the identification of the basic needs of the victims. All procurement procedures were followed in the implementation of the project.”

General Manager of the Sierra Leone Housing Corporation (SALHOC), Ing. Charles Musa narrated that the camp was first identified to resettle the 2015 flash floods victims, adding that when the 2017 mudslide occurred, the government with support from three indigenous construction companies resettled the survivors at Mile Six.

He however, expressed concerns over the encroachments of the allotted land, promising to put systems in place to ensure that there is enough land to relocate potential victims.

Deputy Minister of Energy who doubles as the SLPP Western Area Rural District Chairman, Dr Eldred Taylor stated that the government is very committed to human capital and infrastructural development, pointing out some of the development achieved in areas of electricity, road networks and education within the district by the government.

He spoke on unity and patriotism and further encouraged everyone to support the vision of H.E. President Julius Maada Bio.

Representing the Chief Minister as the guest of honour, Western Region Resident Minister, Nabila Tunis sympathised with the survivors for their loss.

She stated that the August 2017 mudslide caused the nation to lose a lot. She informed everyone that the President cares for every Sierra Leonean especially disaster victims, and that is why he established the NDMA under the direct supervision of the Chief Minister, Jacob Jusu Saffa.

“During Ebola in 2015, the President, who was the opposition leader then, travelled from the UK to sympathize with the affected population and helped the previous government to fight the epidemic. He did so because he believed that Sierra Leone is ‘One Country’ and that we are all ‘One People’.

“As a listening President who believes that every Sierra Leonean is important and that their lives matter, he established the NDMA to manage disasters and has been providing direct support to the Agency to effectively manage disaster-related issues in the country.

The government has been providing the required funds to respond to affected victims and the prevention of disasters. All this is done because it is the government’s responsibility to protect and provide for its people”, she informed.

Chairlady of the camp, Madam Rugiatu noted that the facilities, especially the market, will boost their economic activities and reduce the financial burden faced by women who had to trek long distances to buy foodstuff. She thanked the NDMA for working tirelessly to improve their living conditions.

Chairman of the Resettlement Camp, Abu Bakarr Kamara expressed his appreciation to the NDMA and by extension the government and the leadership of President Julius Maada Bio for restoring the dignity of survivors and alleviating their suffering.

He cautioned the beneficiaries to handle the facilities provided to them with care, admonishing victims to judiciously utilize the direct cash transfers.

All 68 households residing at the camp received a bag of rice (50 kg), two gallons of vegetable cooking oil, a direct cash transfer of NLe2,000 (Two Thousand Leones) each and building materials to rehabilitate some units that were destroyed by wind storms.