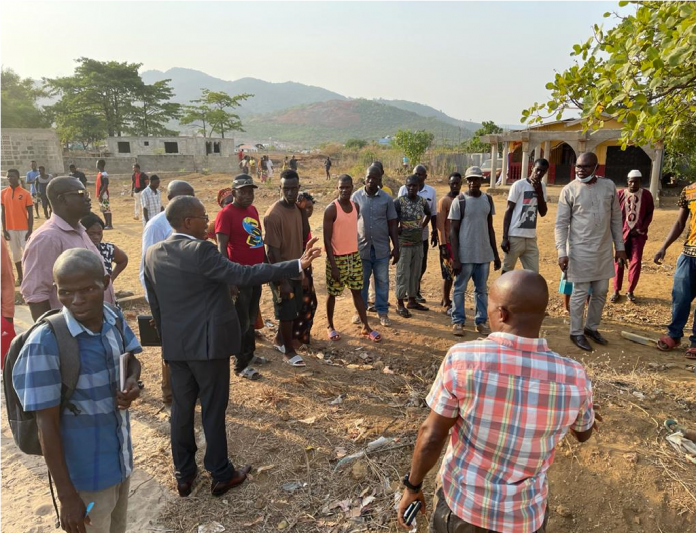 The Minister of Lands, Housing and Country Planning, Dr. Turad Senesie was at the Western Area Rural communities of Kerry Town and Mac Donald, where he successfully settled critical land disputes and visited proposed development sites.

At Kerry Town, the Minister immediately moved into action to settle a serious land dispute between school authorities and other community members.

The dispute that had earlier resulted in a violent clash that warranted the intervention of the police, was brought to the attention of the Minister during a community stakeholders meeting.

Following physical verification of the disputed land, the community unreservedly embraced the decision of the minister to properly assign boundaries that made room for an additional playground and other other facilities for the school, while at the same time accordingly allocating boundaries to aggrieved community members in a manner that enhances peace and supports a well planned area with provision for access roads where there were none.

The Minister only left the community after all the aggrieved parties including a lady that was seriously injured in the land commotion earlier in the day, were made happy.

Dr. Senesie was then taken on a conducted tour of the proposed development site in Kerry Town for the construction of a state-of-the-art hospital with support from the Lebanese Government. Site clearing is already at an advanced stage.

The Minister also visited the nearby proposed site for the construction of thousands of affordable housing facilities also to be sponsored by the Government and People of Lebanon.

A similar affordable housing proposed development site at the Mac Donald community was also visited by the minister, alongside the Lebanese contractor after a brief engagement with leaders of the town.

According to the Minister, the visited western area rural communities are expected to be used as model locations to pilot affordable housing facilities as part of his vision to provide lowcost shelter for the low and middle income level Sierra Leoneans.

He encouraged the community people to embrace national development, while assuring them that he will continue with his leadership style of constructive engagement with the people to ensure a win win situation.

Minister Turad Senesie reminded the community people that it is the responsibility of government to properly manage all land in the country to ensure judicious utilization including proper planning and creating room for development that will benefit all and sundry.

“The new direction government is determined to lay a solid foundation for the future generation,” he emphatically disclosed, while stressing the need to properly manage land for a better future.

He urged the residents to support the new country planning and housing focus of the sector, while disclosing that the time to reverse the negative trend of land disputes, provide shelter and produce properly planned communities is now.

At the proposed development sites, the Minister cautioned all community members to desist from selling or constructing any structure, as according to him, those portions of land were strictly reserved for national development purposes.

Town Chiefs and community people of both communities showered praises on the minister for introducing a human-face approach in land management and administration.

The Minister was assured of absolute cooperation of the communities at all times.

They cherished the minister’s approach of frank discussions and engagements, while praying that such engagements continue.