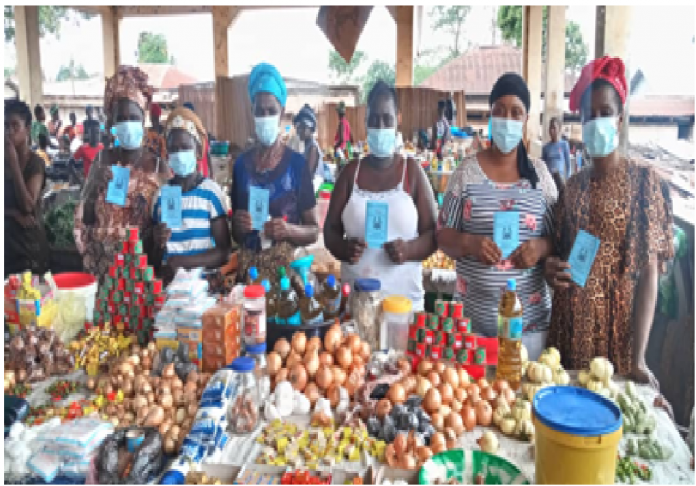 A mobile vaccination team is on its way out to its first assignment of the day in Sierra Leone’s southern Bonthe district.

The 12-mile journey from Bum village, where they are based, to Tassor village, would have taken Nurse Ann Marie Keifa and her team 3hrs on a motor bike. But the boat ride cuts the time to 45 minutes.

“The boat ride is shorter, but it is also difficult,” says Nurse Ann Marie, who is the In-Charge-at the Bum Community Health Center, explaining that the water route is not only expensive but that it is also strenuous, given that they have to go through several boat rides to reach their destinations.

This is one of five teams of vaccinators deployed across Bonthe district and as part of a nationwide campaign by the NGO FOCUS 1000. The initiative which is supported with funding from the Africa CDC was designed to increase uptake of COVID-19 vaccine in a country with one of the lowest number of unvaccinated people.

FOCUS 1000 is implementing the initiative in collaboration with the Ministry of Health and other local and international partners.

Bonthe is one of the most deprived parts of Sierra Leone and its challenging geographical terrain is a big part of this.

But Nurse Ann Marie and her team have to overcome all the challenges. With about a week to go in the month-long campaign, they have to vaccinate the inhabitants of the 103 villages in the chiefdom.

Pastor Isaiah Koroma, FOCUS 1000 District Coordinator, supervises all five teams in Bonthe, occasionally going out into the field himself.

“We are getting good turnout, despite the constraints associated with the difficult terrain we have to deal with and some vaccine skepticism,” Pastor Koroma tells KMN.

He adds that due to community sensitisation, a lot of people are taking the jabs.

This initiative, dubbed the ‘Accelerated COVID-19 Vaccination Campaign’, involves hundreds of volunteers, clustered into 103 teams deployed across the 16 districts of Sierra Leone. The goal is to vaccinate at least 80,000 people.

“We are working in tandem with all the stakeholders to make sure that we accelerate the vaccination of people especially between the ages of 18 years and above. We want them to be fully vaccinated so that they can be protected against COVID-19,” says Mohamed Bailor Jalloh, Chief Executive Officer of FOCUS 1000.

When the campaign was launched at the end of September, only between 300,000 and 400,000 people in Sierra Leone had received at least one dose of a COVID-19 vaccine, translating to about 3 percent of the population.

Thanks partly to this initiative, the number of vaccinated people in the country is now well over half a million, according to data obtained from the field.

Data from the National COVID-19 Emergency Response Center (NaCOVERC) show that less than half of Sierra Leone’s vaccinated population are fully immunised.

This huge disparity has been a concern to officials, prompting a rethink of the country’s approach to vaccination. The focus now is access – reaching out to the people, especially those in hard-to-reach-communities like Tassor.

The NaCOVERC is currently implementing a 20-day vaccination surge that involves mobile vaccination teams moving to communities to vaccinate people.

The FOCUS 1000 initiative has at least one mobile team in each district, providing support to over 80 stationary teams across the country.

Bonthe is one of the districts hardest hit by the pandemic in Sierra Leone, where 6,397 cumulative confirmed cases have been recorded as at October 22.

While it appears to have subsided in Sierra Leone and other countries, experts say the emergency is far from over, especially in light of reports of some Western countries dealing with resurgence of infections.

They also warn that low vaccination coverage poses high risk of the emergence of new variants, which could further complicate efforts to contain the pandemic anytime soon.

While health measures like social distancing and mask wearing remain the standing protocol of the World Health Organisation (WHO) and other global public health authorities, they all agree that vaccination is the only way to break the chain of transmission.

In Sierra Leone’s revised plan, it hopes to vaccinate 20 percent of its eligible population by the end of 2021. But like in other African countries, hesitancy and jab shortages have hindered this effort.

While there is little it can do about the latter, FOCUS 1000 relies on its strength of community engagement, through its partner the Kombra Network, to deal with the former.

The Network uses a blend of religious and traditional influences to promote recommended health seeking behaviours. Its members, from religious leaders to market women, traditional healers to civil society and the media, are embedded in each of the 103 vaccination teams deployed nationwide and helping in the social mobilisation efforts.

Thomas Nyambe represents the Network in the Torma Bum team.

Armed with a megaphone, he goes around in the communities urging the people to come out and take the vaccine. Nyambe says it’s difficult to convince people given entrenched views based on fake news about the negative effect of the vaccine.

“Some people tell us that they are afraid to die if they take the vaccine. I tell them that it is not true, that the same vaccine has been taken by the president, ministers, MPs, and even Councilors. If it really kills, everybody will die and who will the government governs? I ask them. Usually when I say this some of them change their minds about the vaccine,” Nyambe narrates.

In neighboring Kpandakemoh chiefdom, Pastor Koroma is supervising an engagement in Motua village. A local chief explained his journey from being a vaccine sceptic to acceptance, with the goal of convincing this group of traditional healers to take the jab.

In other chiefdoms across the district, the volunteers go through difficulties trying to mobilise people. Bonthe mostly comprises of islands, with many of the villages easily accessible only by boats.

The mobilisation teams therefore have to transport people who are willing to take the jabs from their various villages to a vaccination center and back.

Sometimes it can get dangerous, like when the engine of a boat Pastor Koroma and one of the teams were on fell off in the middle of a river.

“It was a fearful experience,” he recalls. “We were in the middle of the water. We were only saved by God’s grace.”

Other Kombra Network members who are not part of the vaccination teams engage people within their local communities, using every available means, including radio panel discussions involving local authorities and influential residents. Town criers, equipped with megaphones, go around the communities and remind people about the importance of taking the vaccine.

Religious leaders use their pulpits to reinforce the message with the help of Biblical and Quranic verses. At the Central Mosque of Matru Jong, the defacto headquarters of Bonthe, Imam Alhaji Hassan Kamara dedicates his entire Jumaa (Friday Prayer) sermon to the vaccination efforts.

And it pays off, as evident in the long queue outside the mosque where a team of vaccinators is stationed.

Maggoh is full of praises for the Kombra Network, for its effort in placing Bo at the top in terms of number of jabs administered.

Every Tuesdays and Fridays, the 16 district coordinators meet via zoom to review progress of the campaign. Latest data from the Friday, October 22 meeting indicates that the overall target had been surpassed by 46,000, with 126,262 jabs administered in three weeks.

Bo maintains its lead with 13,232 jabs administered. With a few days more to go, the queues are only growing longer, thanks to hardworking Kombra Network community mobilisers like Nyambe and Alieu Koroma of Upper Malen chiefdom in Pujehun.

The question now is how to sustain this momentum, both in terms of availability of the vaccines and to encourage people to continue taking the jabs. 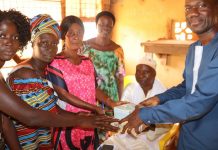