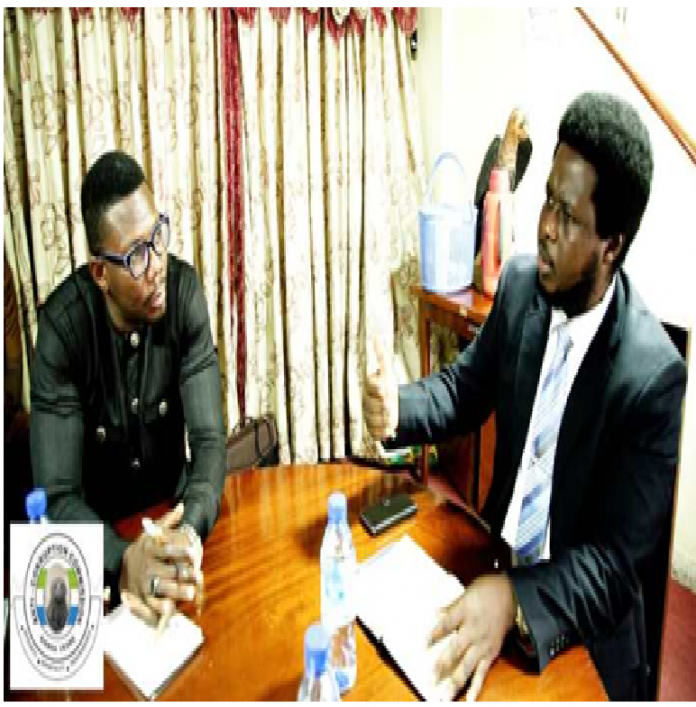 The main purpose of their visit is to learn and benefit from the experience of ACC, because the concept of corruption from the two countries is similar, and it is therefore important to learn from successes and ask questions. He said they have been following the work of the ACC-Sierra Leone and have seen the positive results they have gained over the years.

He thanked the Commissioner and his team for granting them the opportunity and hope that this venture will have a positive impact on their institution.

The ACC Commissioner in his statement said, he was pleased for such a great move by the Liberia Anti-Corruption Commission.

He said the whole idea in the war against corruption is to make it a high risk and low return venture.In other words, make corruption very expensive. He added that the ACC fight against the graft is built on four pillars which are; Prevention, Public Education, Investigation and Prosecution.

Commissioner Kaifala in summary highlighted some of the actions taken by the Anti-Corruption Commission Sierra Leone, which has yielded positive results over three years. He emphasized on points like press releases and enforcement but also noted that the bedrock of the fight against corruption is prevention. The ACC Czar furthered that a strong and vibrant preventiondepartment examines practices and procedures in MDAs and proffer recommendations to improve service delivery. He also added that for corruption to be a high risk low return venture, there must be a Presidential will, Political Will and support from the people.

Deputy Commissioner of ACC, Augustine FodayNgobie, who served as the chairman of the meeting said, Liberia and Sierra Leone are two different countries but have similar social and political culture. He said they have agreed to share the processes on how ACC have gained results in the last three years.

It could be recalled that aboutthree weeks ago, a delegation from Liberia including Head of the country’s Financial Intelligence Unit, representatives from LACC and Revenue Authority paid a courtesy call on the Commissioner of the Anti-Corruption Commission, Francis Ben Kaifala to also learn the processes the FIU in Sierra Leone employ in the mutual evaluation report of the 34th Plenary and Technical Commission of Intergovernmental Action against Money Laundering in West Africa, where Sierra Leone’s FIU scored notable successes.