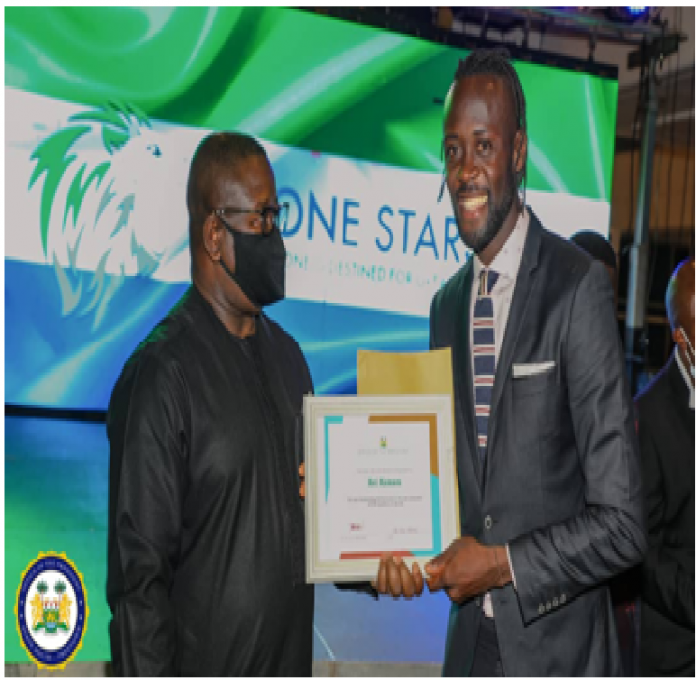 President Dr Julius Maada Bio fondly known as (Tok ‘N’ Do) has handed over a cheque for Le4.1 billion to the Chairman of the National Sports Council and presented a conveyance to each of the 41 players and officials of the Leone Stars team.

This was done at a dinner in honour of the players, hosted by the First Lady Fatima Maada Bio at the Bintumani Hotel in Freetown past Sunday night.

In her welcome statement, the first lady congratulated the players and officials of the team and thanked them for making the country proud, adding that football should not be political because the country also needed sport to maintain a happy nation.

Speaking on behalf of his teammates, Kei Kamara who scored the qualifying goal expressed gratitude to the president and first lady for hosting a presidential dinner in their honour.

He also appreciated the Team Coach, John Keister for being patient with them and for ensuring that they had a victory. He encouraged young people, who want to participate in sports to take their education seriously and also urged his colleagues to be role models in society.

In his address to the gathering, President Bio noted that for a while now the country had been divided along party and regional lines but stated that because of the victory that Leone Stars brought home, there was a huge sign of unity. The president also said that they were gathered to celebrate the team because the country was proud of its citizens.

He assured the players and officials of his continued support to make sure that the team was ready for AFCON, adding that it would definitely be an effective way of uniting the country again.

The president ended by thanking Sierra Leoneans for supporting the team and encouraging the footballers and their managers to do their best to maintain the momentum by showcasing themselves and the country for bigger opportunities.

“I want to thank all of you who played your parts in ensuring that we had victory. Going to Cameroon next year, I want to see you play classic football,” he urged the players.