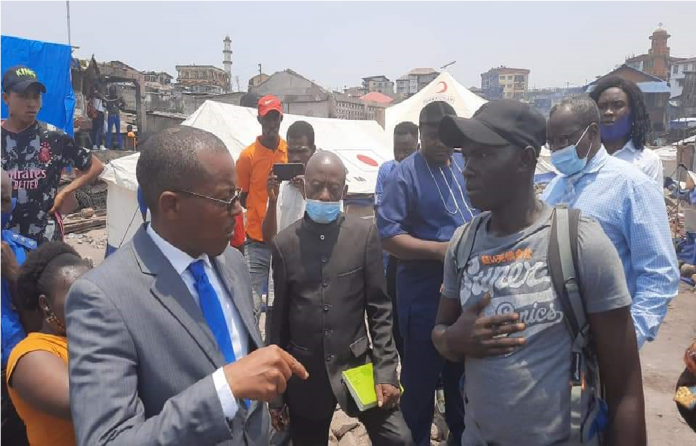 The Minister of Lands, Housing and Country Planning, Dr. Turad Senesie has described the ravaging fire incident at the Susan’s Bay slum community as a crisis, while expressing the urgent need for humanitarian and other interventions of various state and non-state actors.

The Minister, who was out of town on an official engagement when the incident happened, was accompanied on Monday March 29 2021 by the Permanent Secretary, Directors and other senior officials of the ministry to visit the location that was gutted down by fire.

It was a mission to ascertain the extent of the damage in other to inform future decisions and interventions with regards to the locality.

The community was razed aground leaving hundreds homeless and properties worth millions of leones completely destroyed.

Minister Senesie has instructed the Director of Lands and Survey, Tamba Dauda to immediately undertake a drone survey of the affected community for further analysis and actions.

He described the disaster as an unfortunate situation we could learn from, while expressing the need for proper planning of such communities that could be developed into micro-cities.

He spoke of the possibility of relocating the residents as part of government’s response, while inviting humanitarian organizations to continue reaching out to the affected Sierra Leoneans that are currently in dire need.

“Let us all learn from the disaster as a country and reflect on our actions towards the environment,” the Minister made a clarion call, while sounding the alarm that the environment will always fight back if not treated properly.

“We will ensure we put in place proper planning mechanisms to ensure such deadly incident never repeats,” the Minister asserted, while noting the need for community engagement and involvement in actualizing the president’s vision for safe cities.

The Director of Lands and Surveys, Tamba Dauda disclosed that a team of surveyors would be deployed in the community to re-survey the whole stretch of land for proper planning purposes.