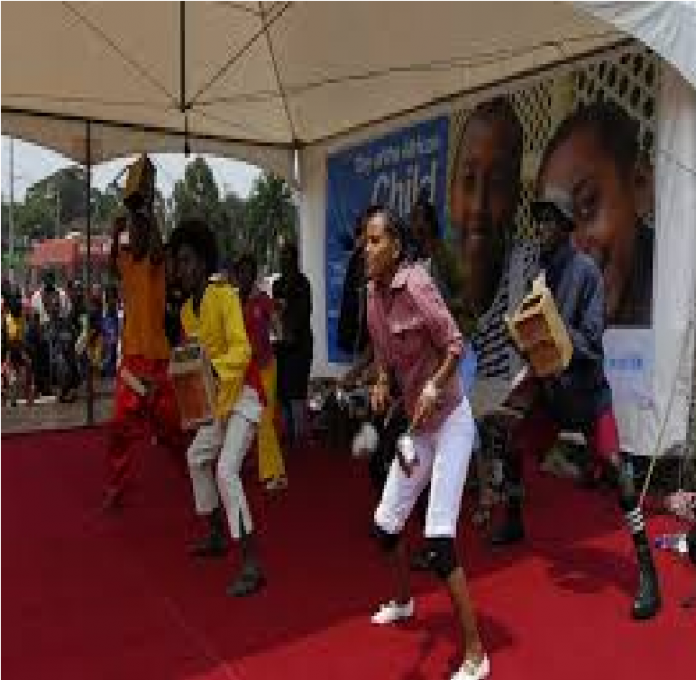 The Legal Aid Boardin collaboration with Champion for Girls Education and Empowerment (ChampGEE)organization, BBB Foundationand Arkman Music commemorates the Day of the African Child with hundreds of children at two separate events.

Both events were organized through the support of Legal Aid Board, Africell Mobile Telecommunications Company SL etc.

The event at the Hockey Pitch at Wilberforce Barracks attracted ten schools within the Wilberforce, Tengbeh Town and Murray Town communities, while the other, a free musical concert spearheaded by Arkman Music was held at the Siaka Stevens Stadium Runway at Brookfields in Freetown.

Speaking to primary school children at the Hockey Pitch, the Executive Director of the Board, Ms.Fatmata Claire Carlton-Hanciles focused on the work of the Board in protecting the rights of children by ensuring parents takethe responsibility of their children seriously. ‘The Board ensures that your parent take good care of you by paying your school fees, provide you with lunch, accommodation and healthcare’, she told the children.

She warned the children against engaging in sex, taking drugs, petty theft, going to prohibited areasand gambling which could land them in trouble. ‘There are too many school-going children serving time in detention centers around the country for committing these crimes,’ she warned.

She thanked ChampGEE and its founder, Major Cecilia Munu for organizing the event. ‘The Board is proud to partner with ChampGEE to celebrate the day with children of the men and women of the Republic of Sierra Leone Armed Forces (RSLAF),’ she said.

At the Siaka Stevens Stadium Runway where the Legal Aid Board Executive Director also addressed hundreds of young people, she implored them tostay away from sex in order not to be distracted from their education. She added that Sexual Offences Act 2012(As amended in 2019) is not a respecter of age.

She further admonished her audience to be studious and not to engagein activities that are in conflict with the law. She urged them to take the Hands off Our Girls Campaign with all the seriousness it deserves.

The eventat the Hockey Pitch was climaxed with dancing and distribution of food to the pupils from the ten schools, while the one at the Siaka Stevens Stadium was climaxed with performances by Arkman and team.