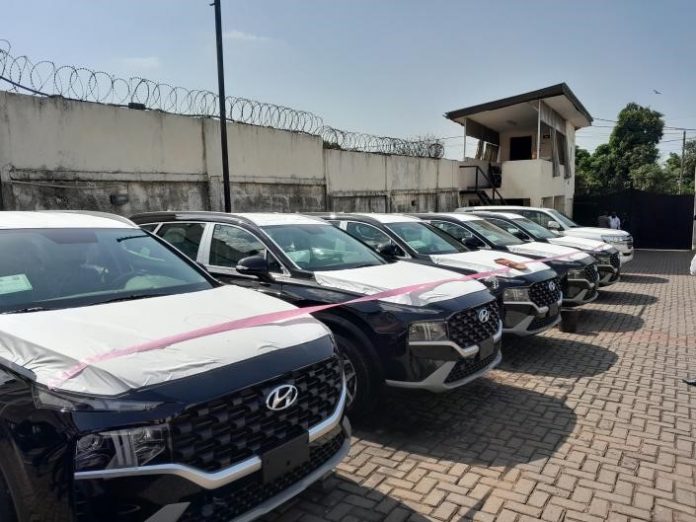 The newly appointed Honorary Consul of the Republic of Korea in Sierra Leone, Mahesh Nandwani, undertook his first official function by handing over five brand new Hyundai SUV vehicles to the Maada and Fatima Bio Foundation at a colorful ceremony held on Thursday 8th December 2022 at the First Lady’s Office in Freetown.

The donated vehicles are meant for the Hands Off our Girls Campaign, which was launched in December 2018 specifically to bring awareness, influence policy, and support women and girls to have access to reproductive healthcare and treatment for conditions like Fistula and Cancer, and to eliminate such abuses like early childhood marriage, gender-based violence, and rape.

Mr. Nandwani in his statement noted that the vehicles were donated following a request that was made by the Foundation to the Republic of Korean Red Cross for the transportation of sanitary pads across Sierra Leone.

He added that the Korean Government realizes the existing good working relationship with Sierra Leone and added that the donation will further strengthen the bilateral ties between the two countries and also promote issues of women and girls.

“I look forward to achieving other milestones in the near future,” the Consul said.

The First Lady, Dr. Fatima Maada Bio thanked the Republic of Korean Government and the Korean Red Cross for supporting their Foundation, which is working for the Office of the First Lady.

“We requested a minibus and they have given us more than that,” she said and continued that the project had been approved in 2020 but a few hiccups along the line caused the delay in the arrival of the vehicles.

The First Lady lauded the good work of the Consul, Mahesh Nandwani, whose private company has been supportive of the national basket project of the Hands Off Our Girls campaign.

“We are grateful that you have supported us throughout this period, from the COVID to Ramadan Donations and the basket fund,” she said and furthered that the Koreans have now given more lights to the Maada and Fatima Bio Foundation to do more work in the country. She promised that the vehicles will be utilised for their intended purpose.