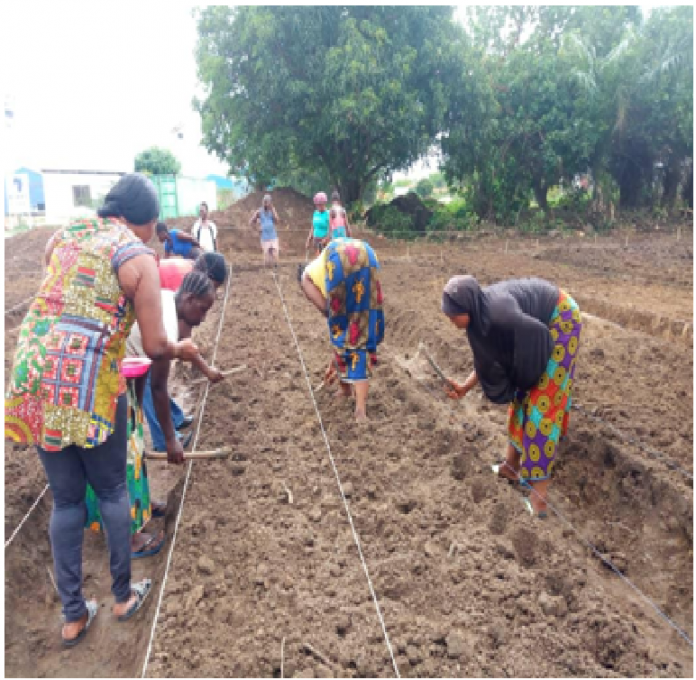 One of the fundamental pillars of Social Corporate Responsibility of Kingho Railway and Port Company Limited is geared towards supporting agricultural production in the operational chiefdom of Kamasondo, in Port Loko District, Northern Province of Sierra Leone.

Against this backdrop, the company through its Community Development Action Plan (CDAP) project has launched massive agriculture project to support women farmers in the port community. This comes at the time when the communities are preparing for the planting raining season, an act which has been warmly received by many in the port chiefdom of Kamasondo.

Led by the Mammy Queen of Kamasondo Chiefdom, the women farmers have shown ultimate support as they come out in their numbers to utilize the equipment given to them by Kingho Railway and Port Company, to help the women boost their livelihood and sustenance.

Whilst working, Kamasondo women were viewed singing and motivating each other as they joyful go through their daily routine.

Meanwhile, it could be recalled that the boost of the agriculture project in Kamasondo comes just a couple of weeks since Kingho Railway and Port Company did handover a newly rehabilitate health center in Pepel Town to the people of the community.

Also worthy to note is that the health center and the women in agriculture project were both identified by the community themselves as very key components in enhancing their livelihood. Kingho Railway and Port, being a company which sees corporate social responsibility as the benchmark for its operations, provide the necessary logistical and manpower support to cater for the significant needs of the people of its operational communities.

Kingho Railway and Port Company Limited is a subsidiary company of Kingho Investment Company Limited. It administers the 192 kilometer railway which leads from the New Tonkolili Iron Ore Mines to the Port town of Pepel, in Kamasondo Chiefdom, Port Loko District. It also operates the Pepel shipping port from which Iron Ore are transported outside the country.