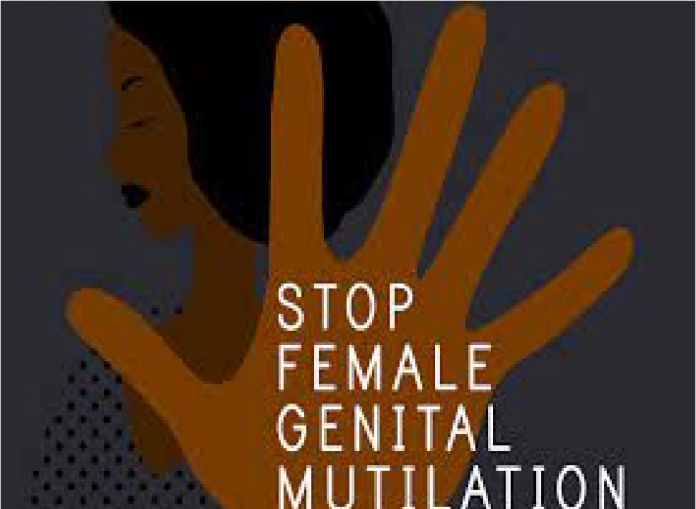 On a hot sunny evening at Mafurka, a tiny village in the remote Mountains of Tonkolili District in northern Sierra Leone, MabintyGbla a 13-year-old school girl speaks proudly with a smile for knowing she will no longer be worried about getting cut during her initiation into the Bondo society – an all female secret society ceremony that involves Female Genital Mutilation (FGM) which customarily happens during the month of December in her village.

UNICEF estimates that 90% of Sierra Leonean women are subjected to genital mutilation.

The Sierra Leone Government in March banned female genital mutilation (FGM) as part of a wider clampdown on secret society initiation ceremonies to limit the spread of  Coronavirus in the country.

For the past two years in Mabinty’s village an astonishing turnaround has been brought about to end FGM practice by a growing local movement of feminist actvists, anti FGM campaingers, community elders, religious leaders and FGM survivors.

The Mafurka community in 2018 decided to destroy their secret society bush where girls are initiated to build a school a few meters outside their village.

Although FGM may seem like an act that women inflict on each other, men actually have the final say, according to AmiduGbla a 40yrs old father of nine children. His eldest daughter Aminata was initiated into the women’s traditional secret society. A decision Gbla now regrets, as he recalls how the family spent all their fortune and took loans to perform a customary rite that hurt girls.

“We are suffering in this village just to sustain these harmful traditional practices,” Gbla said.

Gbla joined the anti FGM movement in his village to advocate for the freedom, dignity and safety of girls.

“We destroyed the Bondo bush to construct a school for our children,” AmiduGbla said. He continued by stating that fathers have the responsibility to protect their daughters, sisters, and wives from harm.

Joe AD Alie, a professor of African studies at the University of Sierra Leone, says more than 90 percent of the country’s population was involved in ancestral and secret rites.

The Government of President Julius Maada Bio plans to launch and fully implement a National Strategy on the elimination of FGM that was developed in 2016. According to Deputy Director of Gender in the Ministry of Gender and Children’s Affairs Goodie Sowonie, “The National Strategic Plan on FGM when launched will establish a National Committee to work closely with all activists and communities to end FGM and achieve long-lasting and positive change”.

All this is triggered by a growing local movement that challenges the values, narratives and institutions that perpetuate FGM on girls in Sierra Leone.

“Educating people is empowering them. It is only through their minds that you can change their attitude,” the leading Anti-FGM Campaigner in Sierra Leone who recently won the German Theodor Haecker Human Rights prize for fighting female genital mutilation, RugiatuNeneh Koroma said.

Neneh and other activists visit villages and engage in dialogue  with the Soweis (FGM Practitioners) explaining to them the adverse physical and physiological effects associated with the prtactice. They encourage the Soweis to maintain the initiation but to replace the cutting with  an alternative rite of passage that keeps girls  free from harm. “We have been able to get about 800 practitioners from 111 villages to put down their knives and embrace a new and safe way of initiation” she said.

“We don’t want to eradicate the Bondo society – it’s our culture – but we want to make sure that FGM is removed from initiation.” she said.

Purposeful a feminist African-rooted global hub for girls activism is partnering with Neneh’s  grassroots organisation – Amazonian Initiative Movement (AIM) and other Anti FGM Campiangers including survivor leaders,  girls and young women to push back against FGM and other forms of violence perpetuated against girls in communities across Sierra Leone. Purposeful is resourcing and documenting the resistance of these grassroot campaigners as they scale up their strategies.

Although the Government of Sierra Leone has undertaken various legislative reforms to address gender equality, with the signing into law the Domestic Violence Act, Child Rights Act and Sexual Offenses Act, but none of these, however, legislate against FGM.

President Julius Maada Bio’s government faces a delicate balancing act over how to manage the increasing outcry against FGM.

“FGM has nothing to do with preserving culture. It is about maintaining the patriarchal system that oppresses girls and controlling female sexuality – shrinking that girl-power before it hits puberty. This is a gross violation of our human rights. It’s time to end it,” Josephine Kamara, the Advocacy lead at Purposeful added.

But convincing people that this ingrained tradition is wrong is an uphill struggle in a country where 66% of the population is illiterate.

According to WHO, every year three million girls are at risk of being subjected to the practice worldwide.

RugiatuNeneh Koroma was featured as the main protagonist in a twenty-five minute film produced by Purposeful titled “A Bloodless Rite” which documents AIM’s alternative initiation ceremony into the Bondo Society for over 70 girls without mutilation otherwise phrased as Bondo without Blood/Cutting.

“We want people to drop their knives, so that the government knows women are ready for a change” Neneh said.

Neneh recalls the pain she felt the day she and four of her sisters were mutilated.

“They used a crude penknife, it was so painful. I bled excessively for two days and fainted when I wanted to walk,”Neneh said, describing how at the age of 11 she was subjected to female genital mutilation.

The twenty-five minutes bloodless rite film was screened during the 16 Days of Activism to end violence against women that ended on December 10, 2020., At every Town and village where  communities gathered for the screening, the film  sparked a debate among locals and FGM practitioners on how and what can be done to end FGM and still preserve the Bondo tradition?

Ya Marie Kamara who has seen changes in her community laments that before the campaign started, an average of 60 girls were cut during the Bondo ceremonies. But today, you hardly hear of any girl being cut in our village.

“The group meets weekly to take stock of their achievements as well as discuss new strategies of supporting other communities to abandon the gruesome practice that leaves victims scarred for life,”she said.

In the past people didn’t talk openly about FGM. But now it has become a concern to everyone, remarked SampaMilla Kamara an FGM practitioner after watching the film at Mafurka village.

In Port Loko Town and Mathaska village where the Bloodless Rite film was shot, an interactive discussion began among local authorities on how to end FGM in their communities. Soweis who have given up the practice and taken up the alternative rite took over radio stations in Port Loko, Kambia, Tonkolili and Bombali Districts to raise awareness and gain public support for an alternative rite of passage.

New research from Save the Children Sierra Leone shows that 13% of Girls are uncircumcised because their families have chosen to opt out of the Bondo society to protect their girls from Female Genital Mutilation (FGM).

“All these towns and villages used to practice FGM, but because of the increased sensitisation led by activists and communities themselves, some soweis are now making public declarations against the practice and calling on others to join the resistance to  protect girls” RugiatuNeneh Koroma said.

A fundamental belief at Purposeful is that the collective power that comes from membership to girls and women only spaces could offer the key to a feminist future free from violence. As such, the African-rooted Feminist organisation values the Bondo Society as a critical space for women and girls and are commited to working with partners like Neneh and others to understand what a feminist re-imagining of this space- free from violence and full of intergenerational dialogue – could look like.

“Together, we can eliminate female genital mutilation by 2030. Doing so will have a positive ripple effect on the health, education and economic advancement of girls and women,” the UN Secretary-General Antonio Guterres said in a statement on International Day of Zero Tolerancefor Female Genital Mutilation on February 6, 2020.

In Sierra Leone,Purposeful a feminist African-rooted global hub for girls activism partnered with Neneh’s  grassroots organisation – Amazonian Initiative Movement (AIM) and other Anti FGM Campiangers including survivor Community leaders,  girls and young womento organise series of radio discussionson the significance of  International Day of Zero Tolerance for Female Genital Mutilation  so as to push back against FGM and other forms of violence perpetuated against girls in communities  as they scale up their strategies.

A Bloodless Rite is being screened on all the local television stations and across rural communities in Sierra Leone.

Visit www.https://youtu.be/dQtl2g_muhU to view it today.