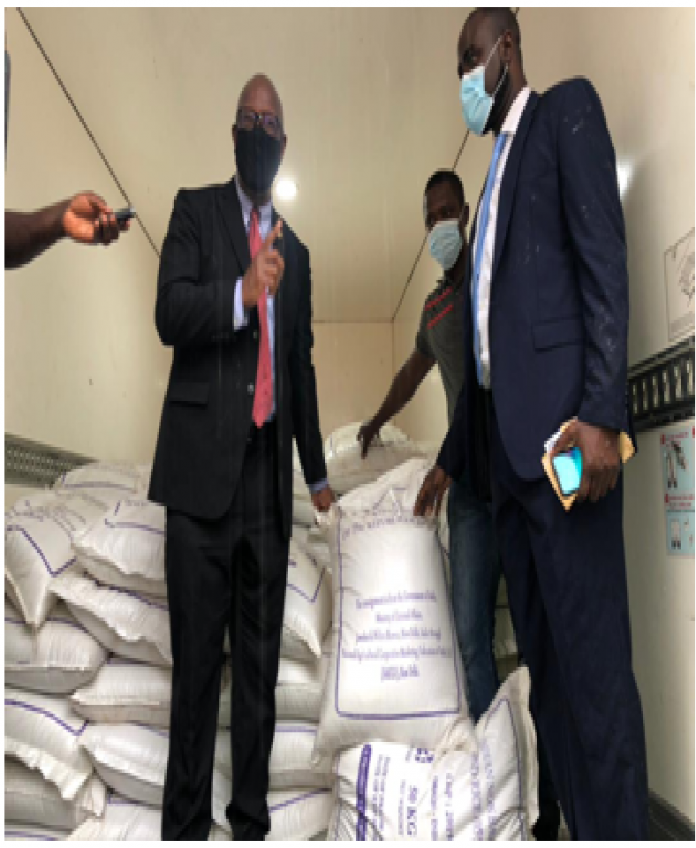 The Ministry of Health and Sanitation, through the National Medical Supplies Agency (NMSA), yesterday 11th August, 2021 handed over 348 bags of rice to the Management of the Connaught Hospital in Freetown.

The 348 bags of rice according to Connaught Hospital’s Care Manager, Dr Med Mustapha S. Kabba, will be able to feed the Connaught hospital for a period of one year.

He said President Julius Maada Bio in his love for his people, decided that the rice be given to the health sector, which according to him will benefit the most vulnerable, sick and the needy, including health workers, especially those in the interiors.

The minister assured that the rice will be distributed through NMSA to benefit all the major hospitals across the country.

The ministry of health he said will remain grateful and continue to look forward to more supports from India and other countries.

The rice the minister ended will be cooked and served to the patience admitted at the hospitals and health workers.

Dr. Lawrence A. Sandi is the Managing Director of NMSA. He said they will ensure the rice reaches all its targeted beneficiaries across the country.

“We will work with the directorate at the ministry and all concern to ensure we distribute the amounts of rice to go to each of the hospitals across the country.” Dr. Sandi stated, adding that NMSA is very grateful to the leadership of the ministry for helping to facilitate the movement of the consignment, starting with the Connaught hospital in Freetown.

He said despite there are challenges to reach the consignments to hard-to-reach areas in the provinces during the rains, NMSA will still ensure a nationwide distribution of the consignment.

Similar distributions of the rice will be replicated to other major hospitals across the country in the coming days and weeks.