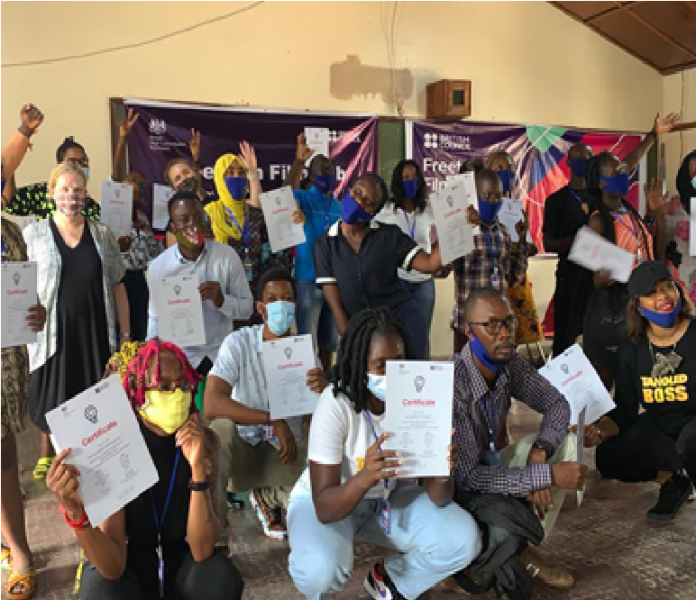 The workshop was funded by the British High Commission as part of the UK’s COP26 campaign, and the final films will be used as part of the International Climate conference being hosted in Glasgow in November this year. The films focused on five topics around climate change and environmental issues and the impacts in Sierra Leone. This covered different short stories highlighting biodiversity, deforestation, sand mining, plastics in the ocean and environmental waste management to raise awareness and effect change in Sierra Leone. These films will be shown on the UK in Sierra Leone social media pages, and at a film screening at the High Commissioner’s residence, to show Sierra Leoneans and those in an international audience the stories of climate change and environmental issues happening within the country as told by Sierra Leonean talent. Raising awareness of the action that needs to be taken to adapt and mitigate against the impacts of climate change.

The first day of training, film makers were off on location, filming and editing of professional videos in different locations within Freetown, the second day focused on editing and the final day teams presented their films back to Nova studios as professional film makers in the UK. The presentations and final films were inspiring, showcasing the talent of the group, and raising awareness of important messages on climate change through film on the damages of deforestation, sand mining and other practices that are detrimental to the country.

The Second Secretary of British High Commission Sierra Leone Katie Hannamhanded out the final certificates to all participants, in her presentation she said: “Sierra Leone is hugely important in the climate debate – as a country of significant biodiversity, an important actor in the region and as one of the world’s countries most impacted by climate change.  Sierra Leone’s climate and environmental challenges are development challenges.

This is why am so pleased to be here today and am really happy that we have been able to support young Sierra Leoneans to take the lead in raising awareness of climate change and its effects.

I have seen such great talents here today, the films are not just entertaining, they can inform and inspire change. Therefore, I encourage you all to make the most out of these skills and expertise.”

The British Council Director Kelly Ferguson said: “Through Freetown Film Lab, we are delighted to be supporting and showcasing local talent within the creative industries, addressing skills gaps and building relationships between UK and Sierra Leonean filmmakers to explore important themes like climate change and gender”

Barmmy Boy of Freetown Media Centre said: ‘’The Freetown Film lab has helped to further strengthen the ties between UK and Sierra Leone, the collaboration with our long standing friends and partners Nova Studios in Hull (Freetown’s twin city) is the backbone for the success of these labs.

With support from British Council and the British High Commission, this strategic intervention has created a team of young change makers taking active steps to start discussions around environmental issues.

Together we have helped up-skill and shape the creative minds of young Sierra Leoneans, not just in filmmaking but also awakened the need to strive for climate resilience in their country by raising awareness through their films.