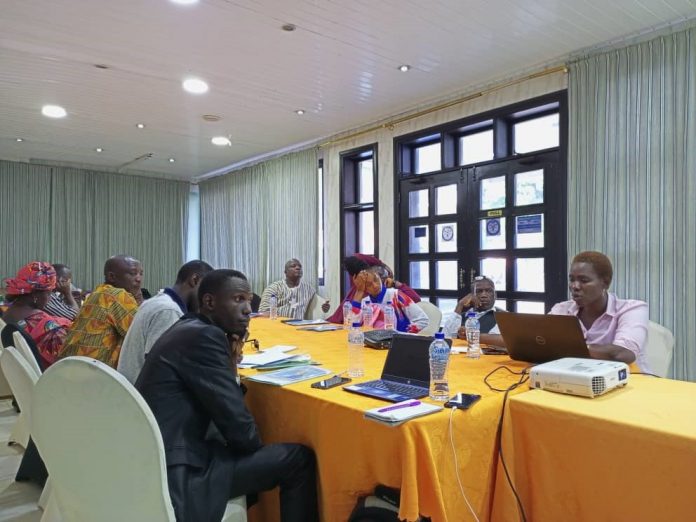 For 10 years, as head of the Freetown District of the Wesleyan Church of Sierra Leone, Rev. Alie Sehdu Conteh never directly engaged with the media.

Even when he was encouraged to do so to publicize the good work of his church, he couldn’t bring himself to entertain journalists around him.

“I didn’t think that I had anything to do with the media. After all, my church was running well,” the soft-spoken clergyman, whose church is one of the most prominent Christian denominations in the country, says.

But his perception of the media changed dramatically after a session with a team of trainers from the Internews Health Journalism Network (HJN). The training was designed to capacitate religious leaders to engage the media to achieve better health information outcomes, in the context of the Covid-19 pandemic.

The programme is part of the global Covid-19 Vaccine Equity Initiative, being implemented alongside faith-based health institutions under the platform of the African Christian Health Association (ACHA).

Internews is one of the consortium partners in the initiative funded by IMA World Health, whose goal is to promote vaccine confidence and increase uptake. Internews’ role is to facilitate dialogue with the media by equipping faith-leaders with the tools to interact with journalists and share health information based on science and facts so people can make informed decisions about their own health.

Sierra Leone has one of the lowest rates of Covid-19 vaccine coverage in Africa, a situation partly fueled by fear, which is itself driven by misinformation, disinformation and fake news.

This training was conducted in collaboration with the Christian Health Association of Sierra Leone (CHASL), the local partner of ACHA. Rev. Conteh was one of 15 religious leaders, drawn from both Christian and Islamic institutions, who attended the training in Freetown on November 10th.

CHASL is a technical coordinating body for all church health institutions in the country, comprising a network of 43-member health facilities nationwide. Florence Bull, Executive Director of CHASL, says the objective of the training is to counter the effect of myths and misconceptions which has stalled uptake of the Covid-19 vaccine.

Sierra Leone hopes to vaccinate 70 percent of its eligible population by the end of the year. But so far, about 51 percent have received at least one dose as of 30th October, according to data from both the Ministry of Health and Sanitation and the World Health Organization.

For the target to be met, says Ms Bull, the myths and misconceptions waning public confidence must be countered. And she believes religious leaders, with their unrivaled influence in the communities they serve, are best placed to help.

“Most often they (religious leaders) are given roles which they are not prepared for. So we thought it fit that we should have this workshop to build their capacity on how to engage media personnel and they will go back as ambassadors within their communities and provide the much needed information,” she says.

Most of the participants walked into the training hall harboring concerns about the media partly due to personal experiences and partly due to reports of unprofessionalism in the media, which many of them say made them hesitate to engage with the media.

Evangelist David Turay recalls being misrepresented by a journalist he’d granted an interview with over a disagreement within his organization.

Sheik Mohamed Ahmed Dukuray recounts an encounter with a reporter he believes was out to smear his faith.

By the end of the nearly seven-hour long session, all of the concerns harbored by the participants had dissipated.

Elder Halima Jallo Jamboria of the Missionary Church of Sierra Leone was particularly happy about the interactive nature of the session.

“The most important thing I have learnt is that the journalist can be my friend,” she says.

Internews, an international nonprofit, works to promote independent journalism. The HJN is a cross-cutting program across the health portfolio, comprising of a growing global community of journalists, communicators, academics, digital innovators, researchers and scientists with a passion for health. HJN started in 2020 at the height of the COVID-19 pandemic and has steadily grown to about 1500 members from over 85 countries.

In 2021, HJN launched its Ambassador’s programme, through which it seeks to promote localized health reporting. I am the latest to join the cohort of journalists as Sierra Leone Ambassador.

Martha Kargbo, a project officer with Internews’ Freetown office, was lead facilitator of the training, which included practical experiences designed to impart skills in the participants to deal with journalists, especially in crisis situations.

As part of one of these practical sessions, Rev. Conteh had his first experience on the ‘hot seat’ – granting an interview to a journalist. That, he says, had a profound impact on his view of the media, making him desire to know more about it.

“It’s an eye-opener training. I have been confronted with information I did not know before,” he says.

“This is my first time to be in a media related training. I have been enlightened about a lot of issues with the media. Now I know why it is important to have friends in the media, whom I can call on when I need to view out something.”