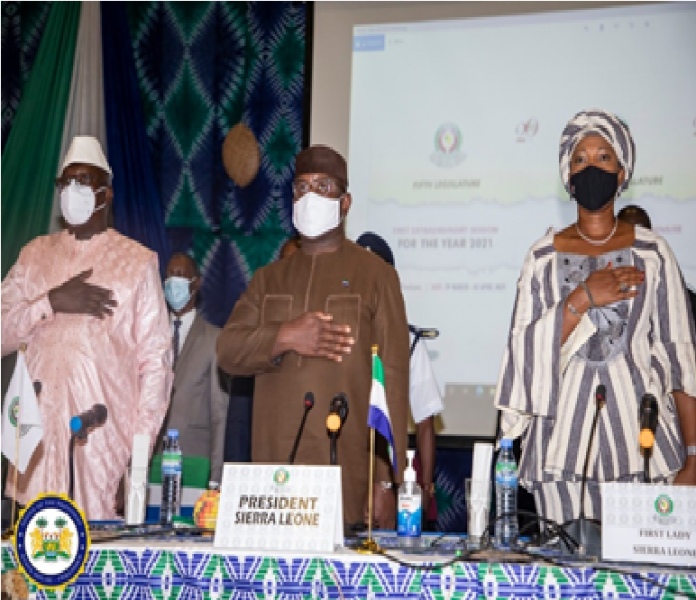 President Julius Maada Bio has officially opened the First Extraordinary Session of the Economic Community of West African States, ECOWAS, Parliament in Freetown for the year 2021.

After requesting the gathering to dedicate a moment of silence in memory of ECOWAS citizens and other citizens in Africa lost to the global pandemic and other causes, the President said he wanted to be the first to officially welcome representatives of member states to Sierra Leone.

He said they might have already discovered that the country was a peaceful place with golden beaches, breath-taking hillscapes, a rich history and culture, and a very friendly people.

“It is no longer the land of war, pestilence, bad governance, and natural disasters. We owe a debt of gratitude to ECOWAS leaders, soldiers, and citizens who helped us safely navigate those dark days in our history. We owe everything else to the sheer willpower of Sierra Leoneans to cope, recover, and move on even stronger.

“Ours is now a land at peace where we have consolidated our democracy and, guided by our human capital development priorities and our Medium-Term National Development Plan, we are firmly focused on achieving inclusive national development,” he said.

He added that it was indeed an honour for all Sierra Leoneans, for the first time ever, to host the Extraordinary Session of the ECOWAS Parliament here in Freetown.

Speaker of the ECOWAS Parliament, Hon. Mohamed Sidi Tunis, said that he was overwhelmed by joy and felt exceedingly glad to host the ECOWAS Parliament in Sierra Leone, saying that even though after the inauguration of the 5th Legislature of his administration, COVID-19 took a toll on humanity with the outbreak last year that limited the execution of their activities.

“Permit me to express publicly my greatest gratitude to the President of the Republic of Sierra Leone, His Excellency, Dr Julius Maada Bio, for the unprecedented support accorded me from the very beginning of this journey. Mr. President your support for this administration and the ECOWAS Parliament is enormous. Your advice and affectionate concern have helped us achieve greatly and I have no words to express how grateful the ECOWAS Parliament is for the support you have shown.

“Furthermore, on behalf of my colleagues, I wish to extend our deepest appreciations to Your Excellency and the wonderful people of Sierra Leone for hosting the first in-person Session of the ECOWAS Parliament during this very difficult period of the global pandemic. This is a clear demonstration of your support for not just the ECOWAS Parliament, but also for the ECOWAS’ policy on regional integration and the drive to bring ECOWAS and its organs closer to the people we serve,” he noted.

The Speaker said that the Parliament had converged on Freetown to execute a solemn responsibility in line with the Supplementary Act on the Enhancement of the Powers of the ECOWAS Parliament, adding that Article 27 (2c) provided that Parliament should endeavour to hold its Extraordinary Sessions in the respective Member States, either on the initiative of the Bureau or at the invitation of the Member State.

Jean-Claude Kassi Brou, President of the ECOWAS Commission, thanked President Julius Maada Bio, the government and people of Sierra Leone for hosting them, saying that the presence of President Bio at the gathering demonstrated strong leadership and willingness to foster development in the ECOWAS community.

He further stated that the essence of their convergence was to put together a strategic plan for the 2021 that would see the organisation foster peace and promote economic diversification among member states.

“Our gathering here today builds on our democracies, security, economic infrastructure, Human Capital Development that could see a new ECOWAS,” he noted.