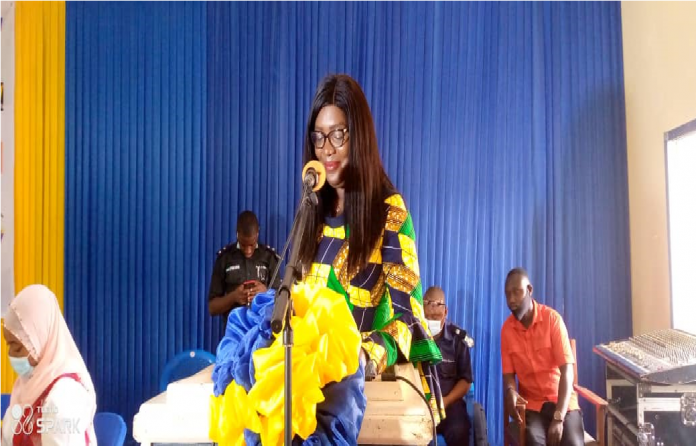 The Deputy Minister of Information and Communications Madam Mamadi Gobeh-Kamara has in Freetown launched the Past and Present Women in Police Association at the Police Officers Mess Kingtom.

In her address the erudite Deputy Minister of Information and Communications expressed thanks and appreciation to the founder and CEO of the association Rtd. AIG Mrs. Kadie Fakondo for her foresight and courage in putting together the Past and Present Women Police Association to seek the welfare and wellbeing of retired female police officers.

She stated that women are a powerful force as there is nothing they cannot do if they put their hearts and minds together.

“Gone are the days when women’s roles are stereotyped. Before now you will hear people say women are the weaker vessels, but they are not because they have seen women breaking glass ceilings and taking over as presidents of nations, chancellors and powerful voices across the world,” she said.

The deputy minister referenced the astute leadership of the DIG of the current Sierra Leone Police force who is a woman and has been doing extremely well.

She admitted that “When you want results try a woman”, adding that the association was created out of the desire to strengthen, unite and raise the capacity of women in policing both locally and internationally.

She furthered that research conducted has shown that women officers often possess better communications skills than their male counterparts and are better able to facilitate the cooperation and trust required to implement a community policing model.

The mercurial deputy minister maintained that it is believed that female police officers often respond more effectively on incidents against women and will ultimately improve response towards domestic violence.

“I am of the firm belief that in Sierra Leone, the service oriented style of policing reveals that women are less likely to misconduct or become cynical towards citizens compared to men,” she said.

Madam Gobeh-Kamara assured the association of her unflinching support and called on the Inspector General of Police to give the women the support they deserve as the association serves a meaningful purpose.

According to the Founder and CEO of the Association Rtd. AIG Mrs. Kadie Fakondor, women in law enforcement have witnessed both the triumph and challenges of policing, but they are all patiently waiting for greater representation of women in the SLP including the senior executive ranks.

She expressed her thanks and appreciation to His Excellency the President Dr. Julius Maada Bio and his Vice President Dr. Mohamed Juldeh Jalloh for appointing a woman to serve as DIG in the Sierra Leone Police Force. She revealed that they have a membership of 49 nationally and 19 in the diaspora.

Madam Fakondo maintained that their vision is to support the SLP particularly in the area of training, mentoring and lecturing of women police personnel.

“Retirement is a normal transition which is supposed to create a positive change in the life of every professional under normal circumstances, but in the law enforcement agencies the narrative in most cases is characterized by untimely death,” she said.

She added that they are determined to provide support to the SLP, assist women in providing durable solutions to their problems and overcome their situations.

She revealed that their association encourages serving members with three (3) years left for retirement in the SLP to join them.

Rtd. Mrs. Fakondor said that the objective for the formation of the association was to interact with serving members and assist them in solving problems that will likely hinder their professional capability to mentor female personnel by way of providing career guidance, organize and participate in fund raising activities relating to the SLP, and to support the SLP in anything the IGP might deem necessary for them to perform their duties.

She called on the leadership of the police to collaborate with the association in order to ensure that retired female police personnel are given the respect they deserve.

In his address the Inspector General of Police Dr. Ambrose Sovula expressed thanks and appreciation to the leadership of the association and commended them for establishing such an organization within the SLP.

He said he feels gratified knowing that such an association is formed under his watch as IGP.

He assured them of their unflinching support and promised to work in partnership with the association to see that they succeed.