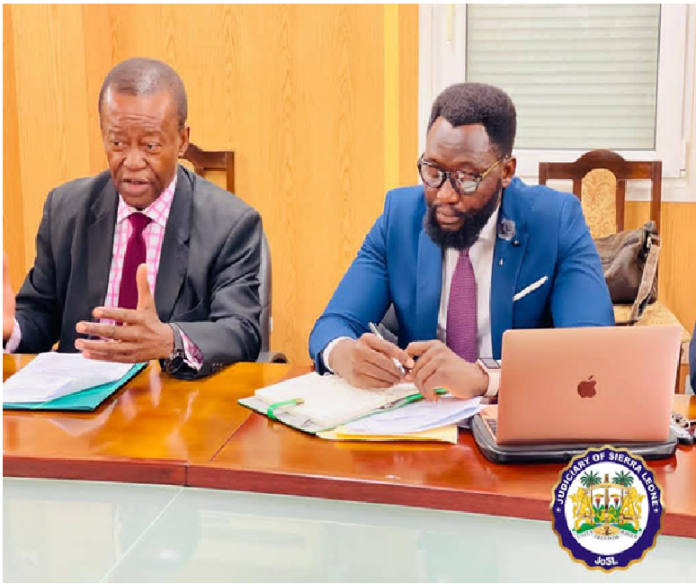 The Supreme Court Judge, N.C.Browne-Marke, was nominated by the Hon. Chief Justice, His Lordship Justice Desmond Babatunde Edwards to head the Committee since he had been involved in the review process from its inception in 2010.

Speaking at the meeting facilitated by the Justice Sector Coordinating Office (JSCO) at the Special Court Building in Freetown, Hon Justice Browne-Marke lauded the efforts of the JSCO for facilitating the review of the Criminal Procedure Bill.

Identifying the thematic areas the Committee should focus on, Hon. Justice Browne-Marke drew the committee’s attention to how prosecutions are brought in the Courts, who can bring prosecutions in the Courts, how trials are to proceed, what new forms of technology should be allowed in Court proceedings, among others.

He also highlighted issues surrounding Jury trials and how to retain it in its current format or modify it and on Sentencing Guidelines.

In his brief statement, the Coordinator of the JSCO, Shahid M. Korjie, explained that a 2009 policy brief by the Institute for Security Studies (ISS) painted a grim picture of Sierra Leone’s criminal justice system.

He noted that the two key recommendations proffered by the ISS policy brief included the need to increase public funding to the sector and review of the Criminal Procedure Act, 1965.

“Over the years, several steps have been taken aimed at enacting the Criminal Procedure Bill, but the process has been characterised by protracted delays even as the country’s criminal justice system needs significant reforms,” he stated.

The Review Committee comprised representatives of the Judiciary, the Office of the Attorney General and Minister of Justice, the Law Reform Commission, the Independent Police Complaints Board, the Sierra Leone Correctional Service, the Human Rights Commission of Sierra Leone, the Sierra Leone Bar Association, the Ministry of Youth Affairs, and civil society organizations, including the Centre for Accountability and Rule of Law and AdvocAid.

Following a very open and enlightening discussion, the participants agreed that the retreat for the final review session will take place from the 24th to 26th June, 2021.

Most of the participants are hopeful that the passing into law of the Criminal Procedure Bill will strengthen the country’s criminal justice service delivery.