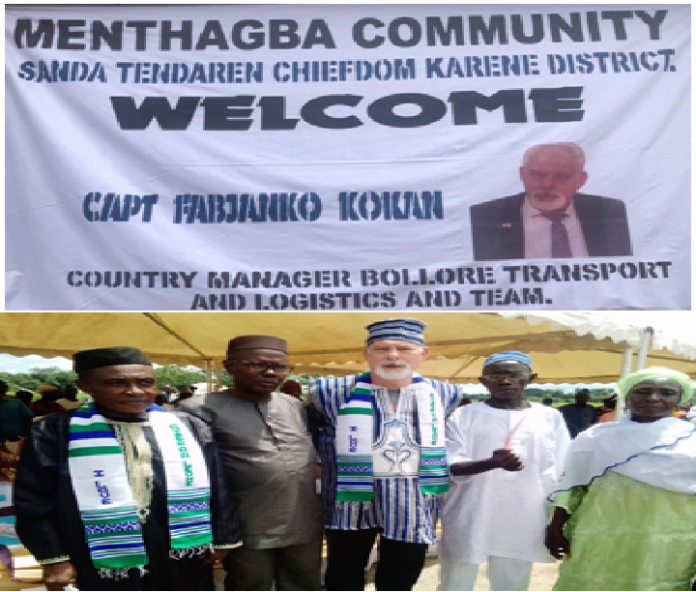 Residents of Menthagba village Sanda Tendaren chiefdom Karene district have crowned the Country Manager of Bollore Transport and Logistics in Sierra Leone, Captain Fabjanko Kokan as their ‘Kapr Kawaleh’ (Chief of the Light).

The crowning ceremony took place during Captain Kokan’s visit to the chiefdom to commission the Menthagba village’s first school in 187 year of existence.

Chief Bundu assured Kapr Kawaleh Captain Kokan that he is now part of Sanda Tendaren chiefdom and that he is always welcome to visit any part of the chiefdom and his will.

Kapr Kawaleh Captain Fabjanko Kokan expressing appreciation for the honor bestowed on him by the authorities of Sanda Tendaren chiefdom.

He assured that he will for always be grateful to them for honouring him and making him part of them.

He recounted that he came to Freetown 7 years ago and it took him very short time to understand that the people are divided along different lines, tribal and politics.

However, he said he does not judge or work with people based on their tribal and/or political affiliations but rather by what they are capable of doing.

He said: “There is no good Captain, no good ship but a good crew. I believe working with and as a team make work lighter and success a must. For me, a finger cannot pick a stone but togetherness can make it happen.” Kapr Kawaleh Captain Kokan stated, while appealing to all and sundry to come together and work as a team in any adventure they find themselves.

The crowning was climaxed with drumming and dancing all over the village led by women and youth.