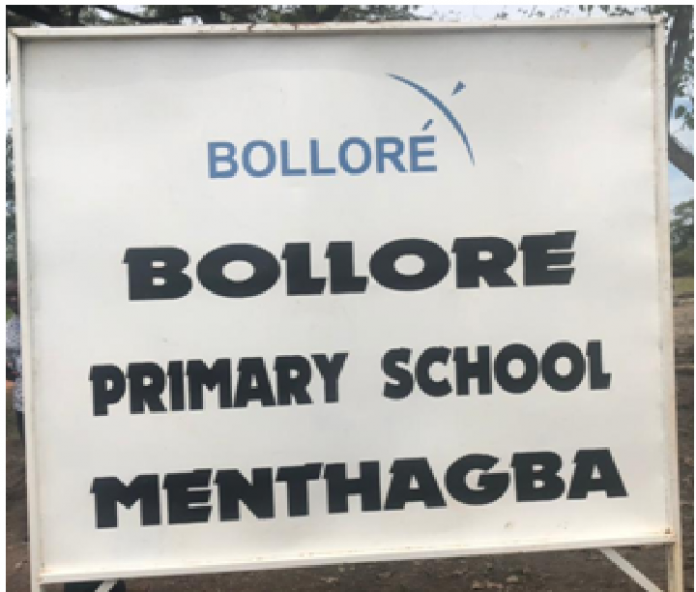 Bollore Transport and Logistics Sierra Leone has supported the construction of the first school at Menthagba village, Sanda Tendaren chiefdom in the Karene district.

For 187 years of its existence, the village has not got a school, hence, causing children to walk long distances on foot to access the chiefdom’s only existing school situated at Mateboi village, some 14 and above miles.

Coordinator of the School Construction Project, Stanley Bangura Jr. told newsmen that in April this year, some key residents of the chiefdom contributed and solicited additional support from Bollore Transport and Logistic Country Manager, Kokan for the project to be successfully completed.

He said at the first approach, Mr. Kokan personally contributed some building materials for the project to commence immediately, but that due to some challenges, the project was unable to commence then until few months later.

According to Mr. Bangura, currently, the school has enrolled 196 pupils (boys and girls) out of 512 hundred pupils that initially applied for enrolment.

He said due to limited spacing, the school cannot accommodate all 512 applicants but had to reject 316 who will continue walking the over 14 miles to reach the school in Mateboi.

Stanley said separate from the newly constructed 3 classrooms building, due to limited fund, only 100 pupils have been provided with complete set of school uniform, and all 196 pupils will be provided with one-pupil-to-a-desks and chairs.

He used the forum as an opportunity to appeal to other stakeholders of the chiefdom and the district by extension, to help provide uniforms to the remaining 96 pupils.

Unfortunately, Mr. Bangura revealed that for now, the school has five of the teachers who are not on government’s payroll. However, he assured that for now, he has vowed to be using his own personal fund to be paying the five teachers until they are approved by government.

He recounted that when he was first approached by Stanley Bangura and team for his support, he wasted no time to render it when he was told it is a school project.

Today that the project has been completed successfully, Mr. Kokan said he is well satisfied that Bollore now owns a school in that part of the country.

He said Bollore Transport and Logistics was created in 1965 and that since then, it has been working with and for the people in need and Menthagba will be no exception.

Regent Chief of Sanda Tendaren chiefdom in the Karene district, Pa Alhaji Bundu on behalf of his people showered praises on Stanley Bangura and team and Bollore Transport and Logistics for boosting education in his chiefdom.

He assured that the school will be well monitored for proper academic performances. Other chiefdom authorities including the Director of Education Karene, women’s and youth groups and civil societies made similar assurances at the event.