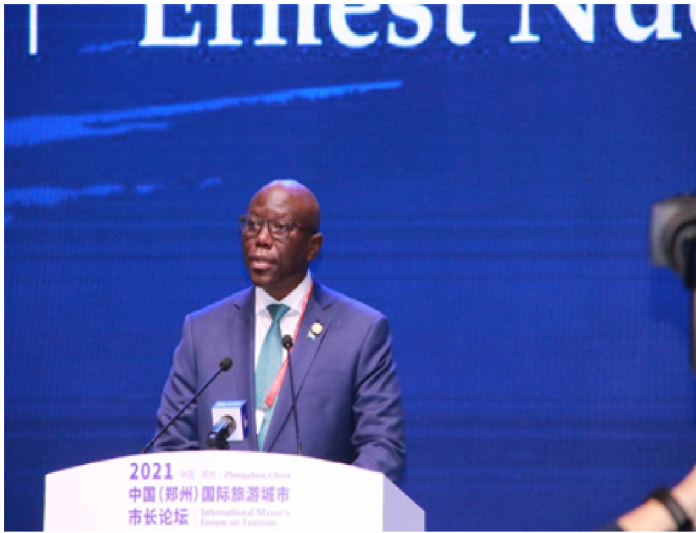 Ernest M. Ndomahina, Ambassador Extraordinary Plenipotentiary of the Republic of Sierra Leone to the People’s Republic of China has participated in this year’s International Mayor’s Forum on Tourism held in Zhengzhou city, in the Henan Province.

This forum has been held six times before the outbreak of the COVID-19. This year’s forum is geared towards finding the pathway for the recovering of the Tourism sector, which is an important sector in boosting the economy in the post-COVID era.

Delivering his address, H.E. Ernest M. Ndomahina said COVID-19 has caused inflicting and untold damage to the tourism industry worldwide. “In the face of its pernicious threats and galloping spread, most countries have responded by restricting the international movement of persons and completely closed leisure and touristic sites,” he added.

He mentioned that the International and Domestic travels were some of the first sectors to be affected by the COVID-19 due to the number of restrictions put in place to contain the virus.

Stating Sierra Leone’s Tourism potential in the post-COVID era, Ambassador Ndomahina mentioned that it was only few weeks ago H.E. Dr. Julius Maada Bio, President of the Republic of Sierra Leone, officially commissioned the Tobanda Beach in Sierra Leone.

He went on to state that the River No. 2 Beach, which is the country most popular beach, has consistently been re-profiled, and rated by some of the world’s renowned tourism magazines as one of the best natural beaches in Africa.

He concluded by expressing optimism on behalf of the people of Sierra Leone that the forum will provide the ample opportunities for broadening the scope of cooperation between Sierra Leone and Henan Province.

Many companies of which some have been operating in Sierra Leone such as the CHICCO and CRSG engaged Sierra Leone’s Ambassador to China on their continued commitment to partner with the Government of Sierra Leone whiles some new companies like the Zejia Industrial Group and number of Agricultural machinery manufacturers that expressed interest for future collaboration between sierra Leone and their companies.

The Forum, which brought together many tourism cities, has been playing a prominent role in facilitating interaction and common development among cities and serving as a bridge for cultural exchange.